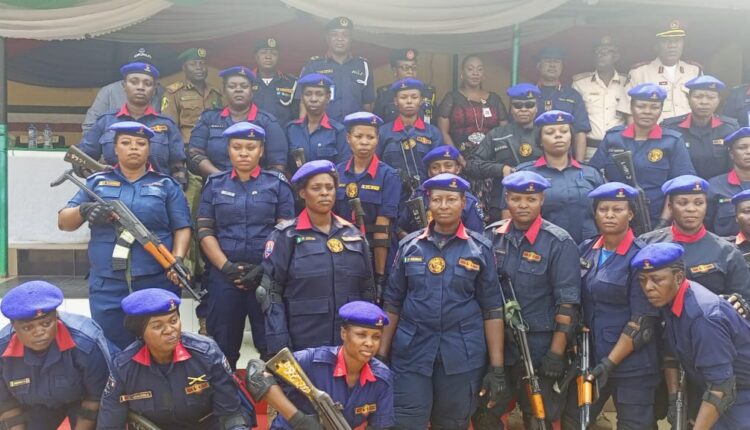 The Nigeria Security and Civil Defence Corps, NSCDC, has deployed a female squad comprising 28 officers as a result of its unflinching commitment to eradicate insecurity challenges such as kidnapping of school children, cultism, bullying among others in schools across Lagos State.

The deployment was said to have been done based on the directive of the NSCDC, Commandant General (CG), Ahmed Audi, who had tasked commandants to establish ‘Female Squads,’ across the country which is designed under the ‘School Safety Initiative,’ to help curb the criminal cases of kidnapping, cultism, bullying, rape and gangsterism particularly perpetrated amongst our school children.

Speaking during the launching of the brand new female strike force of the Command, at the State Command Headquarters, in Alausa Ikeja, Lagos, on Thursday, the Commandant, NSCDC, Lagos State Command, Eweka Okoro, stated that the deployment of the female squad was necessary because of the rate of insecurities scavenging around schools in the state.

Okoro, said that the ‘Female Squad would be saddled with the responsibility of combating nefarious activities in schools amongst our school children.

He also noted that the squad would carry out awareness campaign against such nefarious activities being perpetrated by school students against their peers and by criminals against school children and their tutors in our society today amidst others .

On their competence, the NSCDC boss assured that the squad have been thoroughly equipped and trained with expertise to be able to work with doggedness and commitment.

“The NSCDC Lagos State Command, Female Squad numbering 28 are well trained arms carrying personnel, who have been carefully selected from various divisions, units and departments across the State Command to be embeded in the special Squad having gone through fresh, tactical, psychological, intellectual, dogged, rugged and rigorous training for a period of six weeks to combat the insecurity menace in our schools .” he said.

Okoro, charged the squad to remain civil in their style of operation and be guided by the Corps’ code of conduct and standard operating procedure while discharging their duties professionally while he urged the public to cooperate with the Squad to deliver on their assigned mandate.

The Commandant further appealed to the Lagos State Government for their unwavering support which would help them do a great job with the brand new Squad, adding that they should deploy tactical and operational teams to further curb the insecurity challenges in the state to its barest minimum.