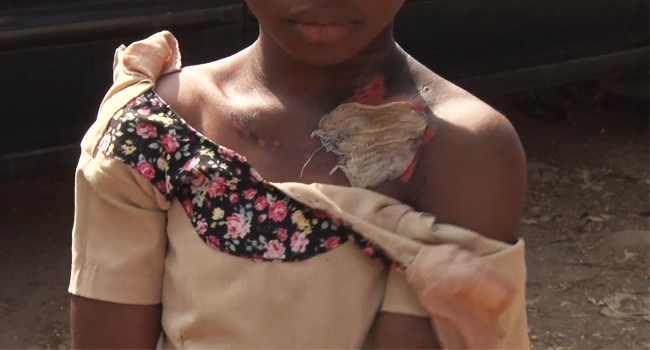 The Nigeria Security and Civil Defence Corps (NSCDC) has arrested and detained a woman for pouring hot water on her 11-year-old daughter in Osun State.

As stated, the woman had during a moment of rage bath her daughter with the hot water, a development that led to her arrest by the security agencies upon report by neighbors.

Confirming the development on Friday at the NSCDC Headquarters in Osogbo, the state Commandant, Emmanuel Ocheja, who paraded the woman and several other crime suspects, noted that the woman was arrested following complaints.

He said that investigations are ongoing to unravel the cause of the incident, adding that the victim had been taken to the hospital for proper medical attention.

When asked for the reason behind her action, the distraught mother said that her action was not deliberate and that she can’t describe what came over her when she took the action.

When journalists asked about what transpired from the victim, the 11-years-old girl explained that she was being punished for misplacing a key.

Meanwhile, another suspect, 44-year-old Amos Danbaba Galadima was also paraded for illegal mining in Ita-Obi community in Ilesha, as well as one Abdulrahmon Ibrahim who was arrested in Kano for alleged stealing of a car.