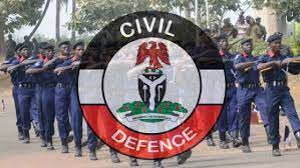 The Nigeria Security and Civil Defence Corps (NSCDC), has arrested a 24-year fraudster, whose name was withheld for advertising fake egg businesses online over N55,000 fraud in Osun.

The suspect was said to have defrauded 37-year old unsuspecting buyer, Halima Ashifa, of the said money while pretending to be running an online wholesale egg store.

s mnmstated that the 24-year-old suspect, whose name was withheld was arrested on two days ago at his residence at Zone 6, Apete area of Owode, Ede, Osun.

Daniel said that the suspect, who is an Ordinary National Diploma Certificate holder from Auchi Polytechnic, had advertised the sales of eggs, under the guise of operating a farm, called Choice Farms, adding he had indicated through his social media handle that his supposed farm was located in Ogbogbo, Ijebu Ode, Ogun State.

He disclosed that Halima had shown interest in the goods which led to her making contacts with him and paid N55,000 for the supply of the eggs to her but after making the payments, it dawned on on her that the suspect was a fraudster.

“One Halima Ashifa, a 37-year-old woman, residing at Sango Otta, in Ogun, signified interests in the suspect supplying the eggs to her. She established contact with him, making a cash transfer of N55,000 in two instalments of N7,500 and N47,500 on Jan. 21 and Jan. 25 respectively, for the supply of the eggs.

“Ashifa was instructed to deposit the money in a GTB account, which the suspect claimed was the account belonging to his company’s secretary, whereas, the account number actually belongs to a Point of Sales (POS) operator at Owode, Ede, Osun,” he said.

Daniel further stated that the suspect, having made confessional statements which found him guilty and culpabile, would be charged to court for prosecution.