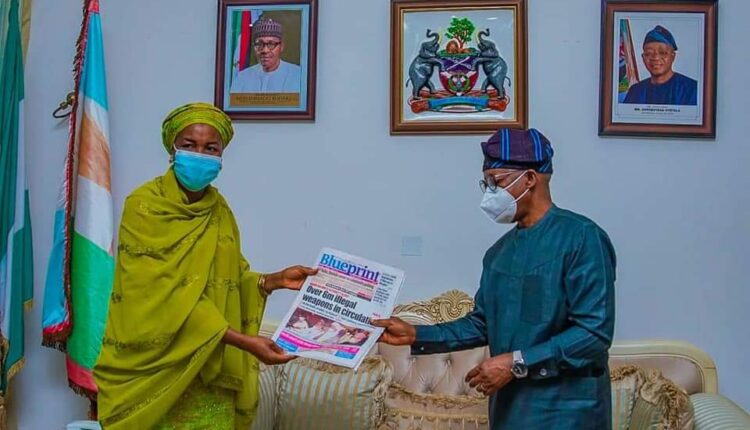 The newspaper’s management explained that the governor was singled out for recognition following his silent achievement in the state since assumption of office, particularly in 2020 when the country was hit by deadly coronavirus pandemic.

The Chairman, Editorial Board of Blueprint Newspaper, Zainab Okino, said that choice of Oyetola followed his developmental efforts in every sector across the state and with visible achievements despite the state’s lean resources.

Speaking when she led the newspaper management team to formally notify the governor of the award, Okino said Oyetola ranked higher among all those selected for the category of the award in Nigeria.

“The governor came tops for his Administration’s purposeful transformation in Health, Education and infrastructure development, including the diversification drive of the administration, anchored on Agriculture, Mining and Culture and Tourisim,” she said.

Receiving the delegation at the government house in Osogbo, Oyetola said that he was pleasantly surprised at his nomination as Governor of the Year of the Blueprint Newspaper.

According to him, I have no inkling that the Blueprint could find me worthy for such great honour.

He added that the award was a validation of the Business Day Newspaper’s earlier award in the same category.

While thanking God for using him to do the modest things he had done for Osun so far, the goveror noted that the award would spur him to do more, since the reward for hard work is more work.

Earlier while formally presenting the letter nominating the governor for the award, Okino also invited Oyetola to personally attend the Blueprint Impact Series Awards, which holds in June, in Abuja.