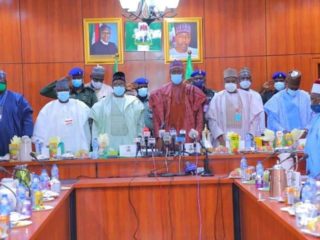 Governors and Traditional rulers across the Northern region are currently meeting behind closed-door to brainstorm and proffer solution to insecurity and other challenges bedeviling the country.

Aside from security challenges, also on the agenda of the northern leaders and critical stakeholders was said to include issues bordering on Value Added Tax (VAT) collecting that has been pitting some state governments against the Federal Government.

The meeting, which is taking place at the Executive Council Chamber of the Kaduna State Government House, was chaired by the Governor of Plateau State, Simon Lalong.

Dignitaries in attendance include the governors of Katsina, Sokoto, Kaduna, Borno, Nasarawa, Jigawa and Gombe. The governors of Niger, Kogi, Benue, Niger, Zamfara and Taraba states are represented by their deputies.

Also present are the Sultan of Sokoto and the Chairman of Northern Traditional Rulers Council, Abubakar Saad. The Shehu of Borno, the Emir of Zazzau, Nuhu Bamali, Estu Nupe, Emir of Kano and other royal fathers are also attending the meeting.

During his opening speech, Lalong said that the meeting had been constituted to look at burning national issues and take important decisions that would affect the region positively.

According to him, the meeting will dwell on issues relating to the peace, progress and development of our people and the nation at large. I believe that this meeting will afford us the opportunity to look into various issues closely.

“Today’s meeting is essentially to get an update on the progress made so far on some of those items particularly on addressing insecurity which is still a major concern in the region. We shall therefore take stock of how far we have gone in tackling banditry, kidnapping and insurgency and also chart the way forward.

“In addition, we shall also take a critical look at some new national issues that have emerged over the recent months and weeks with a view to coming up with a position of the region as well as adopting the best possible approach to ensuring that the interest of the region is protected and promoted. Key among them is the issue of Value Added Tax collection and the surrounding controversy.

“As usual, I look forward to robust contributions from all members that will lead us to arrive at very meaningful conclusions that will impact positively on the fortunes of our people. Once again I welcome you to this meeting and look forward to successful deliberations,” he said.

On his part, the host governor, Nasir El-Rufai, bemoaned the various challenges, economic, insecurity and that of federalism bedevelling the region, noting that there was need for urgent attention and solutions.

The Chairman, Northern Traditional Council and Sultan of Sokoto, Sa’ad Abubakar lll, who led the region’s monarchs to the meeting, noted that Nigerians are expecting a lot from the meeting of the regional governors, urging the Forum to reflect on the last meeting and how far its resolution had been implemented.