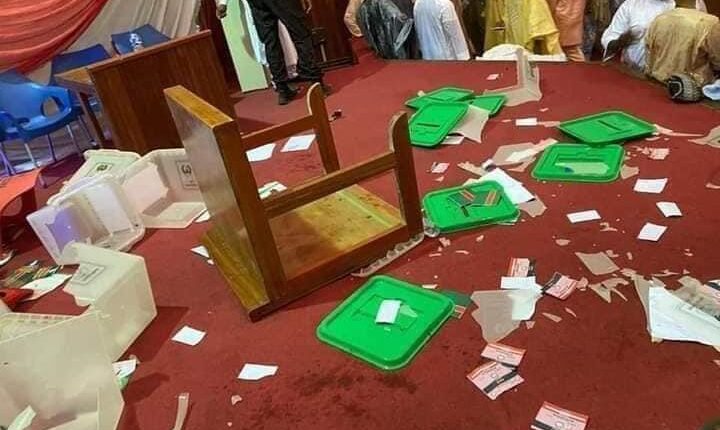 Hundreds of delegates at the Peoples Democratic Party (PDP) North-West zonal congress in Kaduna State were forced to flee after hoodlums stormed the premises, clashed and destroyed the ballot boxes and other facilities within the premises.

It was learnt that the fracas that trailed the congress led to some members sustaining injuries and property worth millions of naira destroyed by the hoodlums.

The hoodlums were said to be loyalists of different factions within the party that were either for or against the modalities set by the party leadership for the North-West PDP zonal congress on Saturday.

It was not clear what caused the chaotic situation but there were insinuations supporters of key contenders were responsible for the unfortunate development that led to the destruction of ballot boxes and chairs.

The major contenders for the position of National Vice Chairman Northwest were Bello Gwarzo, Aminu Wali, and a candidate of Kano former Governor, Rabiu Kwankwaso.

Some party members alleged that the loyalists of Kwankwaso were responsible for the chaotic situation that disrupted the process, forcing the delegates to flee in order to avoid sustaining injuries during the exercise.

Before the crisis occurred, Kwankwaso arrived at the congress venue with several of his loyalists who were chanting his name and claimed that he remains the leader of the party within the region.

The chant, it was learnt, annoyed the Sokoto State Governor, Aminu Tambuwal, supporters who felted that the Kwankwaso loyalist could manipulate the process to favour them.

Following the development, the chairman of the congress committee, Abdul-Rahman Usman disclosed that the exercise has been suspended to protect life and property of delegates.

Usman noted that the decision was reached after an emergency meeting to address the challenges that had trailed the processes in the region.

He noted that the party leadership would return to its secretariat and review the process to address the challenges that had trailed the exercise within the party.