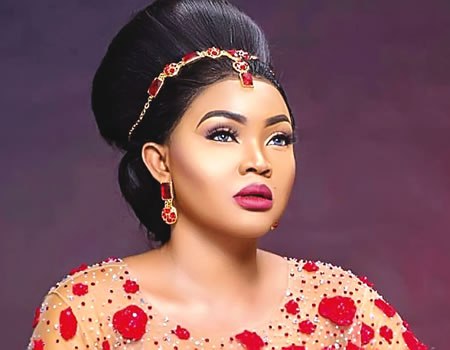 Nollywood actress, Mercy Aigbe, is apparently yet to come to terms with demise of her sister, Elizabeth Ajayi, describing the day she was confirmed dead as the toughest day of her life.

The over 40 years old actress, who is still mourning the death of her sister that passed on barely a week ago, stressed that she hope news on Lizzy, as she was famously called, was just one of her bad dreams and wished someone can wake her up.

Aigbe noted that she previously thought her strength could withstand whatever difficult challenge life threw at her but the perception was shattered after Lizzy was confirmed dead by medical experts.

In a statement posted on her social media handle on Thursday titled ‘Toughest Day of my life’, the multi-award-winning actress claimed that before her burial, she still hoped the medical officials would call her that Lizzy had sneezed and returned to life.

She said: “I thought I could withstand whatever life throws at me but nothing prepared me for this sudden, horrible separation … This past one week has been the darkest of my life!!!! I thought I was having a bad dream! I kept thinking someone will wake me up!

“From the hospital begging the doctors to try all they can, to the morgue hoping you will move your limbs, I prayed! I prayed fervently !!!Hoping and desperate for a miracle! .,,, Till this morn I was hoping they will call from the morgue to say you had sneezed, opened your eyes, moved your limbs I prayed!

According to her, but God knows best …,,,… To everyone who called, sent DM, texted, to those who came to see me despite the lock down, for all your prayers , I say a very big thank you, May we not mourn over our loved ones in Jesus Name !

“To my darling sister Mrs Elizabeth Orobosa Ajayi, I will miss you…. but it is well. Fly high and soar with the angels sis! Adieu”.