Lagos may go under another lockdown after 135 COVID-19… 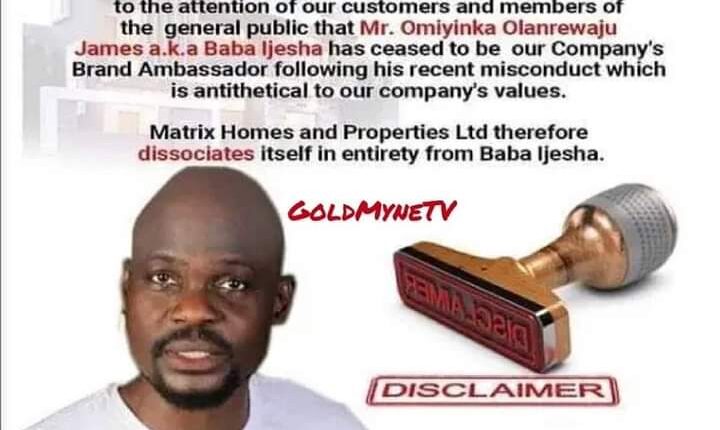 Omiyinka who was detained by the law enforcement agency for sexually assaulting a 14years-old girl lost his endorsement deal as a Brand Ambassador to the property firm.

was said to have admitted to the crime perpetrated on the victims since she was 7years old.

He lost this lucrative endorsement deal barely 24 hours after the foster mother of the victim, a Comedienne, Damilola Adekoya, popularly called Princess, Baba Ijesha’s colleagues, and others stormed the State Criminal and Investigative Department (SCID), in Panti, Yaba where the suspect was currently been detained by the Nigerian Police and kicked against the planned release of Omiyinka.

The property firm took to their official social media handle to put on notice of disclaimer on the embattled actor saying his behaviour was antithetical to the values of the company.

The company wrote, “Matrix Homes and Properties Limited wishes to bring to the attention of our customers and members of the general public that Lanre Omiyinka, a.k.a Baba Ijesha has ceased to be our Company’s Brand Ambassador following his recent misconduct which antithetical to our company’s values. Matrix Homes and Properties Limited, therefore, dissociates itself entirely from Baba Ijesha.”