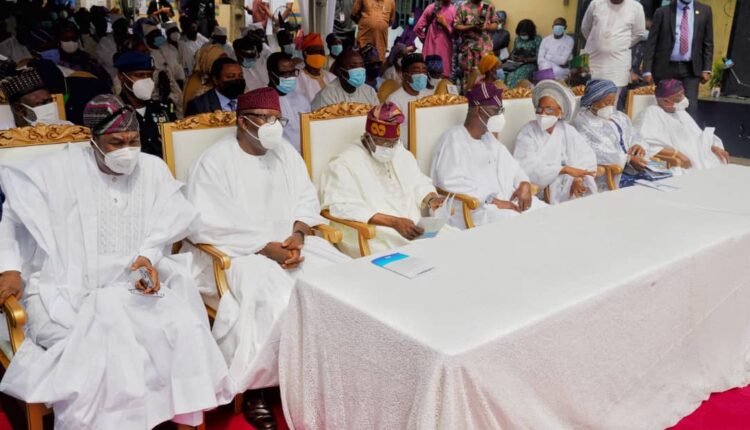 The National leader of the All Progressive Congress (APC), Asiwaju Bola Tinubu, has said that the infrastructural development witnessed across Lagos State during the four-year administration of late former Governor, Lateef Jakande, cannot be matched or surpassed by any politician in the country.

Tinubu, who described the late Jakande as the most progressive politician who lived in the current period, added that Jakande’s record in prudence and public resources management remains a benchmark for anyone seeking to govern any state across the country.

He stated these at the 8th day Fidau (Islamic funeral prayers) held for the deceased at his Ilupeju residence on Friday which was also attended by the state governor, Babajide Sanwo-Olu, and his counterpart from Ekiti state, Kayode Fayemi, Ogun former governor Olusegun Osoba, Senator Ahmad Yerima, Lagos Deputy governor, Dr. Obafemi Hamzat, and Chief Imam of Lagos, Oluwatoyin Abou-Nolla, were part of the dignitaries at the occasion.

Tinubu, who was the third civilian governor to rule Lagos, recalled his foray into politics, noting that he cut his first political tooth under the late Jakande.

He said: “Jakande was the most progressive individual that we ever had. He was progressive to the core. We are extremely lucky in Lagos to draw from his fountain of knowledge and wisdom. Nigeria is also lucky to be served by this forward-looking politician.”

“There is no way a political leader in this age would beat Jakande’s record. He is already a martyr. It is only from our own character and our vision that we will drive our mission in today’s governance”, the APC leader added.

Earlier, Sanwo-Olu said that the legacy bequeathed by the first Civilian governor in public service would remain a reference point in annals of governance in the country.

Sanwo-Olu said the late Jakande had earned a place of pride within the coven of the nation’s political class, stressing that the name of the former Governor would continue to be synonymous with selflessness in leadership and service.

The Governor, who extolled the virtues of the late ex-Governor, said that the late Jakande served with a clear conscience and with the determination to leave Lagos developed than he met it. He pledged that the State Government would preserve the iconic legacy left in the service of Lagos.

He said: “Baba Jakande came into public service with sole determination to serve and leave a good legacy for us. He only governed for four years and three months, but his marks and records are still visible almost 40 years after. What he did for Lagos and Nigeria are beyond what his family can bear alone.

“He was an enigma of our time and a National icon, whose leadership in public service remains a reference point. This is a time for all of us in position of leadership today to reflect on how our administration, our policies and programmes have impacted lives of the people”.

Sanwo-Olu disclosed that honour for the deceased would not end with the Fidau, disclosing that a formal day of honour for the late Jakande was being planned by the State Government and the family would be availed of the details.

The National Missioner Ansar-Ud Deen Society of Nigeria, Abdulrahaman Ahmad, in his sermon, said that the late Jakande was a library in public leadership whose entire life was a testimony of service to humanity.

Ahmad, meanwhile, admonished present league of political leaders to work for the people and create a legacy for which they would be remembered after leaving offices.

Also, Mudir of Markaz Islamic Institute in Agege, Habibulah Adam Al-Ilory, said the late Jakande came to the world with a destiny of impact, saying, as a public administrator, the late Jakande led with fear of God and left a legacy of good governance that will never be erased on the annals of the nation.

The first son of the late former Governor, Deji Jakande, who spoke on behalf of the family, hailed Tinubu, Sanwo-Olu and residents of Lagos for the support to the family since the death of their departed patriarch.