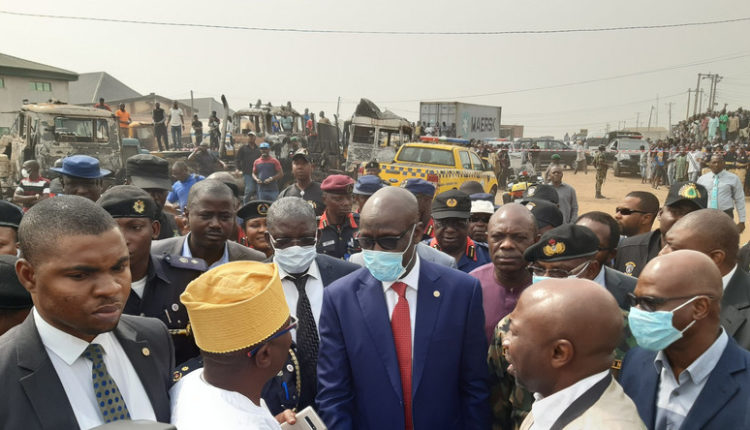 The Nigerian National Petroleum Corporation (NNPC) Group Managing Director (GMD), Mele Kyari, has commiserated with relatives of Abule-Ado gas explosion victims in Lagos State, describing the incident, which had resulted to loss of lives and properties, as sad and unfortunate.

Kyari, who offered prayed that God grant succor to families of the explosion victims that lost their lives at one of the corporation’s major pipeline locations in Abule-Ado, stated that the tragic incident could have been avoided if residents had adhered to earlier safety measures offered by the corporation.

He reiterated that the corporation’s assets, such as petroleum pipelines or gas pipelines, were sensitive fixtures in which Right Of Way (ROW) must be respected by residents to prevent loss of lives and property.

Kyari argued that erecting illegal business or residential structures within the ROW was not to be condoned as such posed great risks to life and property, not only for such establishments but to the state.

Speaking to pressmen, on Monday, during an emergency visit to scene of the incident, the NNPC boss stated that the corporation was set to prevent reoccurrence of such incidents through enforcement of ROW for its assets around the country and that the body would operate a zero-tolerance for non-compliance so that it could ensure safety of lives and properties in relation to its pipeline locations.

Kyari stated that NNPC would continue to work with the Lagos State Government and Nigerian Police to remove all structures illegally erected around pipelines as soon as possible and that the body expected Lagosians to comply with and respect pipeline rights of ways.

The NNPC boss said that apart from the high possibility of explosions, there also existed the possibility of spills and pollution which could adversely affect the health of people living in close proximity to the pipelines and that as such, it was in best interests of Lagosians to give wide berth to areas where pipelines were sunk and had right of way.

“We are here to commiserate with the good people of Lagos State on what happened. It is very unfortunate but completely avoidable,”

“It is very obvious that people are building houses on our right of way which constitutes a serious danger to lives and property”.

“For the avoidance of doubt, every asset on the right of way, we will take them out because this is not just about NNPC pipeline but it is about the lives and safety of Nigerians”.