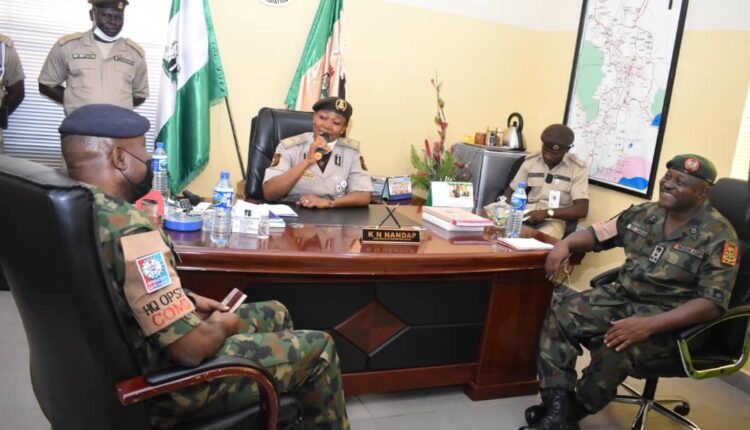 As part of its effort in supporting the Federal Government in its response against coronavirus, the Nigeria Immigration Service has partnered with the Nigerian military on immigration law enforcement in Plateau State.

It explained that there was a need to protect the country’s border from the influx of migrants that might have contracted coronavirus.

According to the agency, the need for partnership became more imperative after Federal Government lifted the ban on interstate travels which was previously imposed to curb interstate transmission of coronavirus and put citizens under compulsory isolation

The Comptroller General of Nigeria Immigration Service, Muhammed Babandede said the partnership followed the gains the service recorded during coronavirus imposed lockdown when officers of the NIS Plateau State Command led by their Comptroller, Nana Nandap, had a harmonious working relationship with other members of the state’s Security and Response Agencies deployed to enforce lockdown compliance.

Babandede, through a statement released to newsmen by the NIS Public Relations Officer, DCI Sunday James, said the partnership was also to augment interagency intelligence sharing and emergency response among both federal entities as part of a measure to ensure adequate security of lives and properties of citizens.

According to him, the Command’s NIS Comptroller had since assumption of duty establishing working relationships with traditional rulers, host community, the Military, Security, and Response Agencies among others in the state which culminated in the partnership.

Babandede, who described Nandep as a unifier and shining example of excellent officers which the NIS boasts of, recalled how the Comptroller embarked on educating and sensitizing motorists at the boundary of Plateau and neighboring states during the lockdown.

He added that Nandep sensitization strategy alongside efforts of other members of the plateau state security and Response Agencies monitoring help in no mean measure to reduce the spread of the deadly respiratory disease during the interstate lockdown.

“Comptroller Nandap has forged ahead cementing working relationships between the officers and men of the Nigeria Immigration Service and the Military, Security and Response Agencies in the plateau.

“This move has given the Command leverage in the sharing of intelligence, enforcement of immigration laws, and ease of operation.

“On this note, the Commander of the Special Task Force Operation Safe Haven in Plateau Major General Chukwuemeka Okonkwo paid her a working visit in return, where issues relating to synergy, collaboration was discussed for a robust Security networking between the two agencies,” the statement read.