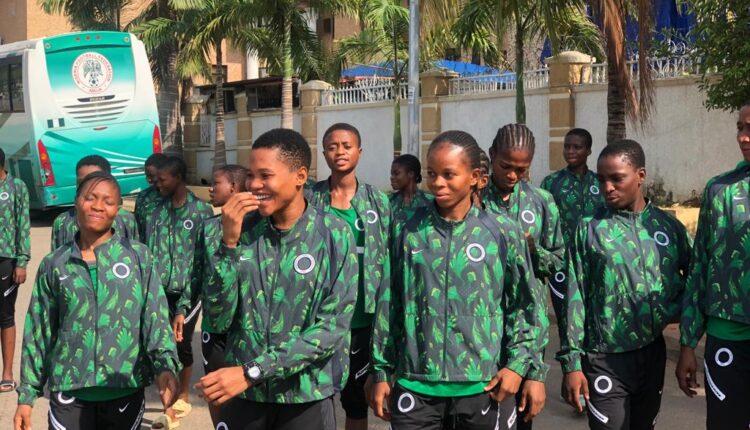 The Nigerian U-17 female team has maintained a good position for the final round of the African qualification series for this year’s Federation of International Football Associations (FIFA) Women’s World Cup after recording a convincing 4-0 victory over Egypt.

Ahead of the return leg in Egypt, the Nigerian team ensured that their opponent did not get chances to record an away goal during the first leg of the game.

During the game played at the MKO Abiola National Stadium in Abuja, the Flamingoes started the game brightly with one of the team’s defender, Tumininu Adeshina, flashing a shot into the side-netting in the 13th minute before the team’s leading scorer, Opeyemi Ajakaiye, got spectators screaming with a snapshot after controlling the ball with her chest outside the eighteen–yard box.

Ajakaiye came close to scoring but the ball was slightly off target and Adeshina again shot above target in the 20th minute, both actions unsettled their opponent.

In the 28th minute, Ajakaiye increased her goal tally to four in the qualifiers by playing an angled shot that beat goalkeeper, Habbiba El Taher, fair and square.

Three minutes later, the ever-busy Laila Zaher got the better of the Nigeria defence and forced goalkeeper, Faith Omilana, into a save, before the ball was cleared from danger.

Nigeria would not relent and it’s forward, Omowunmi Bello, headed home the second goal in the 39th minute from a corner kick by Tumininu Adeshina.

In the second half, Ajakaiye meandered her way past the Egyptian defence in the 46th minute but Judith Okah just failed to utilize the opportunity.

Eight minutes later, a Nigerian defender, Miracle Usani, found herself with the ball just outside the Egyptian box after everyone had missed a corner kick and slammed past goalkeeper El Taher for Nigeria’s third.

In the 62nd minute, Bello again showed immense composure to lift the ball above onrushing El Taher, after she had been brilliantly played-in by the excellent Taiwo Afolabi on a counterattack.

Bello had two more opportunities to claim a hat-trick but missed narrowly from close range, just as Ajakaiye fluffed a good opportunity with 14 minutes left.

Both teams clash again in Cairo on April 30th. The winner will most likely play Ethiopia in the final round of the series for a ticket to the FIFA World Cup in India.