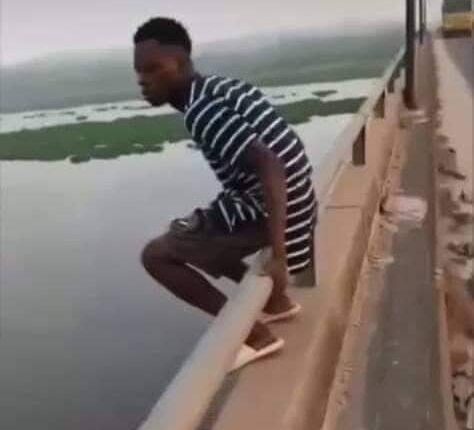 It was a rather depressing moment, last week, reading the story of a young man, who sat on the rails of the Third Mainland Bridge in Lagos and jumped straight into the Lagoon – a case of suicide. He has been identified as Lekan Odunare, 25, married to a 19-year old lady, and father of a one year old daughter.

His body was found a week after the actual incident. I was very uncomfortable reading the story. It was too graphic. The image of a young man sitting at his own chosen departure lounge, locked between that chasm: here and the hereafter, opting for finality, was a different kind of euthanasia, given the public nature of it. One fellow had the effrontery to video-record the mortal crisis, and one other voice could be heard pleading with the man, on the road to death, as he mumbled “asta- gafiru llahi.” It means: “I seek forgiveness from God”. And he jumped. And that was it.

The mother of his daughter has reportedly said he had been depressed and he had told his family members to take care of his daughter. But why would anyone kill himself or herself? Why would anyone knowing that a course of action is wrong still embark upon it? Why do ordinarily good people commit evil or do wrong – what Phillip Zimbardo calls The Lucifer Effect in a book of the same title.

Nigeria is in the grips of a local pandemic and it is mass psychosis. The experts tell us that since 2015 there has been a sharp rise in cases of suicide, violence, and conflicts in Nigeria. Increasingly, people just decide that they are tired and they seek to end it all. Some Nigerians seek greener pastures elsewhere in the universe but for every person that succeeds, there are probably hundreds that failed. People are losing hope. They can’t cope. They live in a country that holds up few promises. Their leaders play games with their future. The country cannot even provide for the sick. Mental health crisis is a health condition like any other treatable illness.

More than 100 years since the first mental health asylum was established in Calabar, Nigeria has no sensible policy on mental health. Stigmas, prejudices persist. We do not have enough mental health personnel or facilities either. Every time a suicide is reported, we all pay brief attention and move on. In a country of over 200 million people, when anything tragic occurs to you, you are reduced to a mere statistic. Nobody may notice that you are dead and gone, except family members. We must put an end to this trend.

There will be more than enough time to worry about why people are taking their own lives, and why more Nigerians are doing so under the Buhari administration, but Nigeria can begin to show that it cares about the people by setting up a suicide deterrent system on that bridge. The rails are too low. They should be raised. Suicide barriers should be provided. There should be 24-hour security surveillance. The Bridge is 11.8 kilometres long. Commissioned in 1990, it is the major link road between the Mainland of Lagos and the Island. It has become a symbol of the aborted hopes of many, a Golgotha in the heart of the city of Lagos. Tragic.