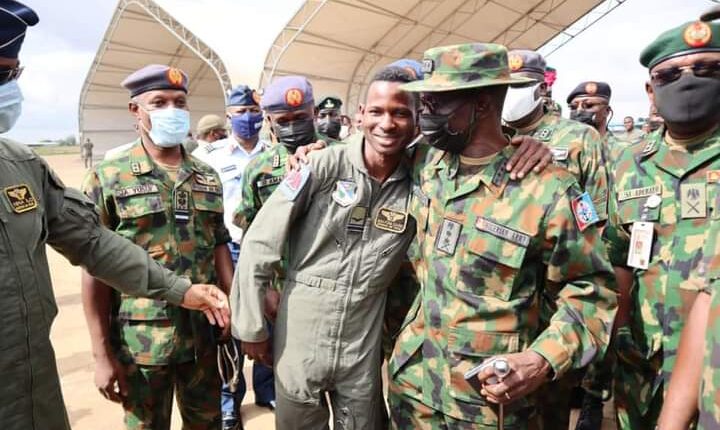 President Joe Biden has a favorite sign-off at the end of every major speech: “May God bless America and may God protect our troops.”

In August 2020, when he gave a speech at the Democratic Convention, Biden ended that way. Same for his November 7, 2020 speech after he won the election. And of course, the line was there when he got inaugurated as President on January 20, 2021.

Biden never served in the military, but his son, Joseph Beau, did, rising to become a Major, but sadly dying of brain cancer in 2015, aged 46.

And like the Biden family, I believe it should be the daily desire of every decent, patriotic Nigerian: May God Bless and Protect Our Troops. May He preserve them, keep them alive, and give them victory, as they deal with the bad guys, and give them bloody noses round the country.

Who are the bad guys? They come under different appellations. Insurgents. Bandits. Kidnappers. Secessionists. Insurrectionists. Cultists. Murderers. Whatever. A bad guy is a bad guy, and deserves to be sent to God to answer for his crimes (apologies Lt. General Faruk Yahaya, Chief of Army Staff). And for those who summarily despatch the bad guys to the judgment bar, may God protect them. Daily. Amen.

This prayer becomes more germane and apposite, after what happened to Air Force officer, Flight Lieutenant Abayomi Dairo, last week. He had gone to distribute what a committed Buharist, Dr Uche Diala, describes as ‘Sallah hampers’ to the bandits in Zamfara, and was flying off after a successful mission. That was when his plane came under severe enemy fire, which eventually sent the aircraft into a nosedive. But before what would have been a fatal crash, the officer baled out via his parachute.

The coyotes would not give up. They engaged in hot pursuit, firing at him all the way. But God had heard the prayers of every good Nigerian. May God protect our troops. And Officer Dairo was preserved, till he got to safety.

Imagine what could have happened if the evil guys got him. They would have killed him worse than you do to a snake, butchering and dismembering him. And they would have recorded it, and put it on social media. Evil hearts would then start sharing it, deriving a pernicious joy in it all, thinking it was the Buhari administration they were undoing. Really? No, they would only be betraying their lack of humanity, and avowing their loyalty to the Devil, that father of all liars and wicked souls.

President Muhammadu Buhari has paid tribute to the heroic acts of Flight Lieutenant Dairo, saying he was relieved that the pilot eventually made it alive. The Chief of Defence Staff, General LEO Irabor, and the Chief of Air Staff, Air Marshal Oladayo Amao, and millions of good Nigerians, have equally rejoiced with Dairo. To the sorrows and regret of the bad guys and evil hearts. I say it again. May God bless and protect our troops. May He keep and preserve them. Amen.

When we sleep at night, and cuddle our wives (or husbands, or pillows, as the case may be), these troops are out on the frontlines, keeping the night watch, and ensuring we enjoy our sleep. When it rains, and we crawl under the blankets, or it shines hot enough to boil the Devil, and we turn our air conditioning to the coldest, these soldiers are out there, under the elements, fighting to keep our country whole. Don’t they like air conditioned offices? Don’t they have wives who can snuggle into their arms at night? Young boys, girls, who call them Daddy, and may not see them for months, years, or forever? May God bless our troops, I say it again. May He keep and preserve them, may they be alive to see the end of the multifaceted security challenges in our country. Amen.

You know what? Some people abuse, deride, denigrate, excoriate our troops. They call them names. They say they’ve not been able to end Boko Haram since 2009. They say bandits are winning the war, and insurrectionists are running rings round them. They rejoice when soldiers get killed. Those who have never even downed a bird with a catapult all their lives, run their mouths off our gallant troops, who sacrifice so much for the country. Pity.

There’s a video that has been running on social media for about a week. A radio talk show host talks about an airliner boarded by American marines. When they came in, all the passengers who had been onboard rose up, and gave them an applause. They remained standing till the last marine had taken his seat.

And when they got to their destination, the passengers began to applaud again, till the last marine had disembarked. That’s how to do it, how to honor those who lay down their lives for us. Those who keep awake, so that we can sleep. Those who fight the bad guys, so that our country can be at peace. May God bless our troops. May He protect them. Amen.

Have you always said unkind things about our troops? Please have a change of heart. They were born, just as you were. Blood flows in their veins, just as it does in your’s. They have only one life, as you do. One precious life, and if it’s taken, the decent dying for the indecent, their loved ones are left to mourn, to sorrow, and be disconsolate. May God protect our troops.

On February 13 this year, I was headed for Umuahia, the Abia State capital, where I was to deliver a lecture the next day as guest of the government. I landed at the Owerri airport, for onward journey to Abia.

As I waited for my hosts at the VIP lounge of the airport, I saw two Air Force officers in full battle camouflage. They greeted me warmly, and we began to chat. They told me they were on the way to Orlu, in Imo State, to dislodge the training camps of some people called Unknown Gunmen, who were troubling the country.

And truly, some minutes later, the officers strode proudly to their fighter jet, boarded, and soon, there was a roar. With the speed of light, the vessel climbed, and disappeared into the azure, blue sky. As it became a speck, just like a dot in a circle, I could not but pray for the officers: May God protect our troops.

Nigeria will see the end of banditry. Of insurgency. Of murders, mayhem, kidnappings. Peace like a river will return to this country. And very soon, too. Did you hear of any bombing and killing that used to attend festive periods this Sallah? No. We are sure making progress. We will soon get there. God will keep us, and protect our troops.

*Adesina is Special Adviser to President Buhari on Media and Publicity