Nigerians should give PDP another chance in 2023 – Saraki 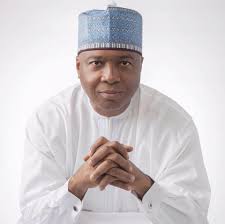 Former Senate President, Bukola Saraki, has disclosed that through the second coming of Peoples Democratic Party (PDP), with the cooperation of Nigerians, would the country restore its lost glory.

He added that though the party has learnt its lesson outside power and was ready to make amends, it would be needing Nigerians’support in becoming the ruling party during the next general elections.

Saraki, who is also a former Kwara State governor, maintained that since both Nigerians and the main opposition party have learnt the hard way, it was important that the duo join forces in ousting the ruling All Progressive Congress (APC) from power through the ballot come 2023.

He made the appeal during his remarks while inaugurating the Direct Labour Agency, DLA, Road, adjoining streets and Government Primary School, Junior Staff Quarters, Asaba in Delta State on invitation of Governor, Ifeanyi Okowa.

The former senate president noted that it was important for Nigerians to trust the former ruling party with a new mandate to lead the country again in 2023 and observe the difference.

According to him, Nigeria was currently in bad shape, with alarming cases of insecurity and economic challenges and it is important Nigerians give PDP another chance to make the difference.

“It gives me great pleasure to be here and to be part of this inauguration. For four years in the Senate, we sat next to each other and I worked very closely with you when we passed the National Health Bill; I am very pleased with your performance here in Delta.

“It is on record that in our party, anytime we have difficult assignments, we come to you because of your competence, integrity and commitment to duty.

“Our country is passing through some difficulties and I appeal to Nigerians to give PDP the chance again to lead Nigeria and you will see the difference.

“Your administration’s commitment to the growth and development of Asaba capital city is laudable and commendable,” Saraki said. He asserted that the future of Nigeria would depend on infrastructure as being provided in Delta. We are proud of what we as PDP government is doing here in Delta,” he said.

In his remarks, Okowa commended Saraki for his exemplary leadership in the PDP and the nation. He expressed delight that his administration achieved the completion of DLA Road and adjoining streets after unsuccessful attempts by previous administrations in the state.

The governor stated that his administration was constructing a gigantic secretariat in the state capital to accommodate all government ministries, departments and agencies.

“We are truly very happy that this road is being inaugurated by you; there have been previous attempts at constructing the road but it failed because of inadequate drainage facilities.

“Beyond the construction of the roads, we have done the major sewer leading to the Amilimocha River and we are glad that the road will be put to use at all times in the year.

“We are constructing a leisure park and a film village because Asaba is home to Nollywood and we will want to maintain our leadership in Nollywood,” he disclosed.