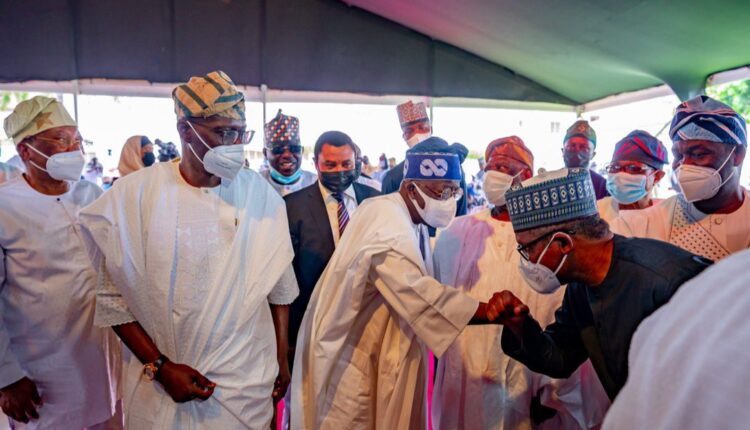 Barely 24 hours after pro-Yoruba secessionist embarked on procession in Abeokuta, Ogun State, the National Leader of All Progressives Congress (APC), Bola Tinubu, has cautioned that the move by the Indigenous People of Biafra (IPOB), Sunday Igboho and other secessionists across Nigeria to jettison the idea, saying, we need to remember what happened in Iraq, Sudan and others.

Tinubu, who argued that the country is better together than separated, stated that whatever issues everyone has could be addressed through dialogue and not secession that often comes with a war that does not end as planned, especially when the nation was yet to recover from the civil war that ended 50 years ago.

The Lagos State former governor made the appeal during a Special Ramadan Prayer Tafsir Lecture, held at the Lagos House, Marina, on Sunday which was attended by the incumbent Governor, Babajide Sanwo-Olu, first national chairman of APC and Osun former governor, Bisi Akande, and other personalities in the state.

According to him, the war drums some people are beating, will result in the disintegration of the country like Sudan and Iraq, and we all know what is currently happening in both countries.

He further said the country is yet to recover from the effects of the civil war, adding that the country cannot afford to experience another war considering that Nigeria is still battling with unemployment and other economic challenges.

“For clamouring for war, God will not allow Nigeria to experience war. If we say Nigeria should separate, people should remember what war caused in Sudan and Iraq. Such war does not end on time. We are yet to recover from the civil war.

“We are better together. I have nowhere I am going. Whoever has experienced war in the past, will not pray for such. Nigeria will not separate, it’s not acceptable to us. Our prayer is for prosperity and more wealth for the country,” the APC leader added.

The National Missioner, Ansar-Ud-deen Society of Nigeria, Ahmad Raman, also called on those clamouring for the country to divide, to have a rethink.

Rahman admitted that though insecurity is on the increase, with constant prayers, change of thoughts and character by Nigerians, the country would come out of it.

“We are insecure, we are unsure, there is hunger, there is anger and confusion in the land. This is the time we need divine intervention. If we gather and pray till 2023, Allah will not listen to us till we do some things”.

He added: “This is the time action is required, backed by deep thoughts for today and our tomorrow. We have often blamed leaders but we have to choose the kind of leaders we deserve. Everywhere is unsafe, even the police station is not safe. We need to rejig.

“For those clamouring to divide the country, maybe you should have a rethink. Ask yourself; where will this clamour for so-called independence lead us? We should reinvent this country. Nigeria will be great.”

Sheikh Muyideen Ajani Bello (Oniwasi Agbaye), called for more prayers, saying what Nigeria is facing is as a result of sins in the country. He called for unity among Yoruba leaders to support the aspirations of Asiwaju Bola Ahmed Tinubu to become the President of the country.