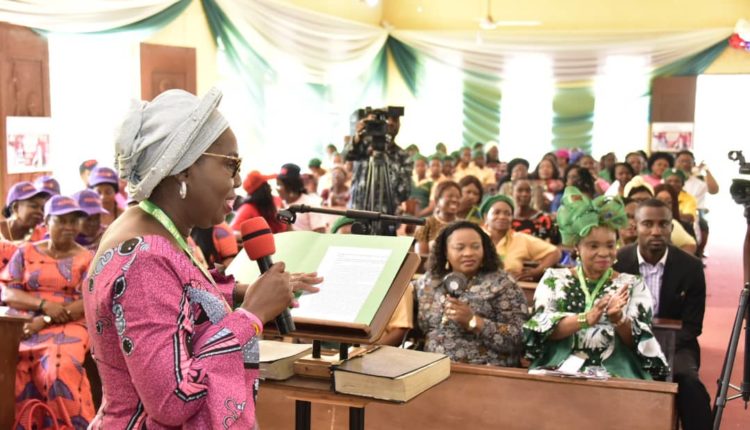 Worried by the sharp variance between girl child in Nigeria and other advanced countries, Wife of Ondo State Governor, Betty- Anyanwu Akeredolu has urged the older generation of women to jointly get involved in the cause of empowering the girl child.
Akeredolu, who noted that the older generation of women might seem to have been inactive towards national development due to the ideology that female children were not expected to speak in public, however, expressed optimism that the narrative could be changed.

She made the appeal while delivering her keynote address titled, ‘Building the next generation of Female Leaders: The Girl Child Education’ at the Winifred Hubbard lecture to mark the Egbu Girls Old Girls Association, EGOGA’s maiden global reunion held at Egbu Owerri, Imo State.

According to her, if older women took the responsibility of getting the next generation of women ready for a life full of innovation and impact, the nation would experience rapid development like other developed countries that invested in girl children.

Akeredolu noted that her passion for promoting the cause of enhancing girl-child education was a way of building on the legacy of his late father who believed that women should fully participate in engineering the development of the society.

The wife of the governor also avowed her readiness to continually foster the education of girl child in Nigeria, while highlighting some of her initiatives committed to the cause of women and girl child since 2009.

Earlier in her welcome address, the Principal of Egbu Girls Secondary School, Lady Onyekachi Basil-Nwachukwu had noted that the school was known for its high standard which made it to produce classical women that had come together to form EGOGA, the like of Mrs. Akeredolu, and others.

She stated that the school remained Nigerian Champion in International Brain Bee(IBB) (Neuroscience) quiz competition for three consecutive years of 2015 in Australia, 2016 in Denmark, and 2017 Washington DC.

The Principal, therefore, commended Akeredolu for giving back to the society that produced her.