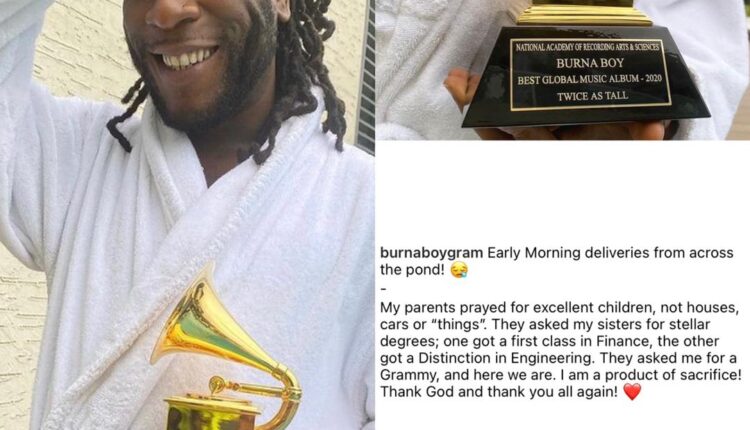 Nigerian singer and songwriter, Damini Ogulu, popularly known as Burna Boy, has finally taken delivery of his Grammy award, months after winning the most coveted award at the 63rd Grammy Awards.

It would be recalled that Burna Boy made history a couple of months ago when he became the first Nigerian solo artiste to win a Grammy award.

The 29-year-old music star won the Grammy Awards under the category of Best World Music Album with his recent album ‘Twice As Tall ‘ which was released in August 2020.

The self-acclaimed African giant, who made the delivery of the award plaque known on his official social media handle on Thursday, flaunts his Grammy awards with an inspirational message.

Burna Boy, in the inspirational message, stated that his parent prayed for excellent children over wealth and that his siblings delivered on the promises they made to their parents being the best in their fields.

Holding the Grammy on his Instagram page, Burnaboy described himself as a product of sacrifice. He further thanked God and everyone who supported him throughout his journey in the music industry.

In the caption that accompanied the post, Burna Boy, expressed gratitude to God, by describing himself as a product of sacrifice. He further thanked his music lovers and everyone who supported him throughout his journey in the music industry.

Alongside a picture of him holding the Grammy on his Instagram page, Burna Boy wrote, ”Early Morning deliveries from across the pond!. My parents prayed for excellent children, not houses, cars, or “things”. They asked my sisters for stellar degrees; one got a first-class in Finance, the other got a Distinction in Engineering. They asked me for a Grammy, and here we are. I am a product of sacrifice! Thank God and thank you all again!”