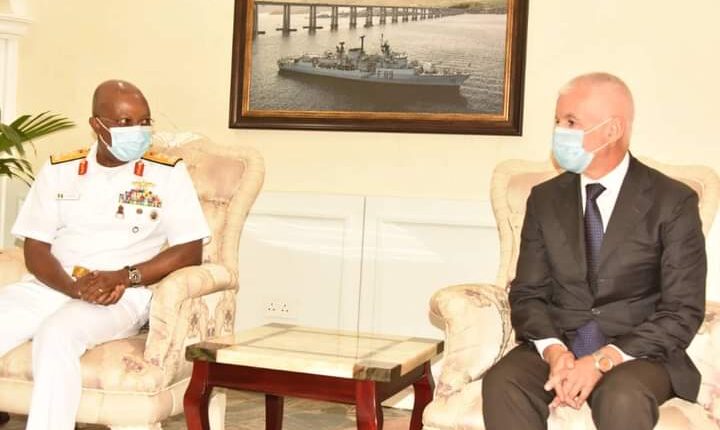 The Nigerian Navy has diclosed that it would be joining forces with other international bodies, including naval bases on securing the Gulf of Guinea from internal and external security challenges.

It explained that the collaboration would be made to maintain and strengthen existing relationships with its partners and work on the same trajectory towards sustaining the gains recorded in securing the Gulf of Guinea.

The Chief of Naval Staff (CNS), Vice Admiral Ibok-Ete Ibas, said that the continous collaboration would augment working relationship between the Gulf of Guinea region navies towards winning the war against insecurity in the region.

Speaking when he played host to the Italian Ambassador to Nigeria, Stefano Pontesilli, who paid him a courtesy visit at the Naval Headquarters yesterday, Ibas hinted that the navy had in the last 4 years reduced the incidences of illegalities, maritime insecurity and piracy in the Nigerian maritime space and within the Gulf of Guinea as efforts have also been intensified towards checking these crimes with positive results.

“The cooperation of international partners through exercises like the recently concluded Exercise Grand African Nemo will go a long way in further improving the safety of the region’s maritime environment as well as boost economic activities.

“The Nigerian Navy is open to exploring other avenues in the areas of training and capacity building for its sailors in hydrography as well as technical expertise in the operationalization and maintenance of the Leonardo helicopter,” he said.

Speaking earlier, Pontesilli explained that he was in the Naval Headquarters to introduce the new Italian Defence Attaché to Nigeria, Colonel Michele Devastato to the CNS.

He stated that Italy was favourably disposed to further cooperation with the Gulf of Guinea in anti-trafficking and maritime security operations.

“The visit was also to intimate the CNS of the successful completion of Exercise Grand African Nemo and that the participating European frigates were currently docking in Tema, Accra.

“The frigates will be moving back to the sea in the Gulf of Guinea and remain there till the middle of December in order to consolidate on the successes of the recently concluded exercise,” the statement said.