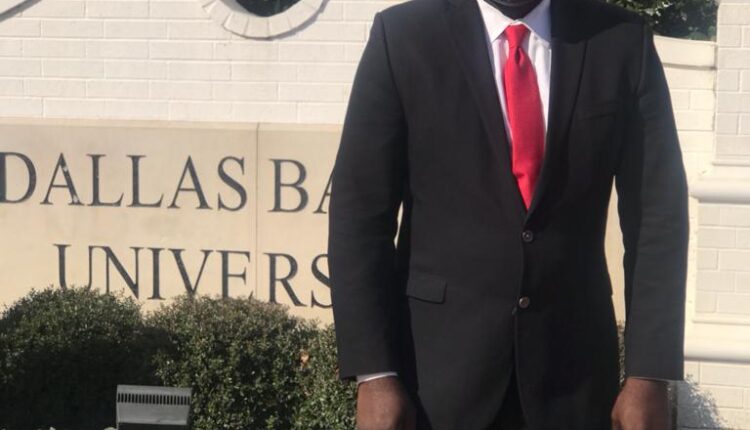 A Nigerian scholar, Lanre Sanusi, has broken a five years record at a United States (US) varsity, Dallas Baptist University in Texas, after completing his Master programme in Business Administration (MBA) at the institution.

Sanusi, on his graduation, broke an existing record, becoming the only Nigerian to have graduated from the great institution over the last five years and with an excellent result from the varsity.

The Nigerian, a scholar, also graduated from the institution with a 3.8 Cumulative Grade Points Average (CGPA) out of the 4.0 obtainable mark set by the varsity for MBA students.

Before this achievement, Sanusi, described as an individual with a penchant for knowledge, had bagged a master’s degree in Accounting and Criminal Justice from the University of Texas in US.

The Nigerian, who was about completing his Ph.D. in law and public policy, was an associate degree holder from Tarrant County College and a Bachelor of Science from Texas varsity.

Outside academics, Sanusi’s achievement in the finance and Healthcare services and management industries has earned him recognition as an outstanding manager of human and material and his zeal for successes has earned him the opportunity to be a member of over four U.S professional bodies: Dallas Institute of healthcare Executives, Dallas Junior Chamber of Commerce, National Association of Tax Professionals, Member National Association of Healthcare Advocacy Consultant.

Also in the public sector of Lagos, Sanusi, a prince from Ijede in Ikorodu, and Amuwo-Odofin Local Government had contributed immensely to the development of democracy in Nigeria over the last 30 years for different political parties particularly the All Progressive Congress (APC).

The accountant, in the over 30 years of politics, has served the public and party as well as worked tirelessly as polling unit party agent, vote canvasser, mobilize in the state.

Also, he acted in various capacities as an active member of several Independent Campaign Groups (ICGs) and others, supporting party flagbearers within his political terrain to fund their campaigns; an act that further indicated his loyalty to the progressive philosophy of APC founding fathers.

Aside from the contribution to Lagos political development, Sanusi has continuously empowered the youths, assisting the needy, less privileged, the aged, widows within and outside the party year in year out.

He often distributes his “Apo Ariyo” (Joyful groceries goodie pack) among party members, non-politicians, students, physically challenged persons, and others quarterly as well as before, and after most national holidays in the country.