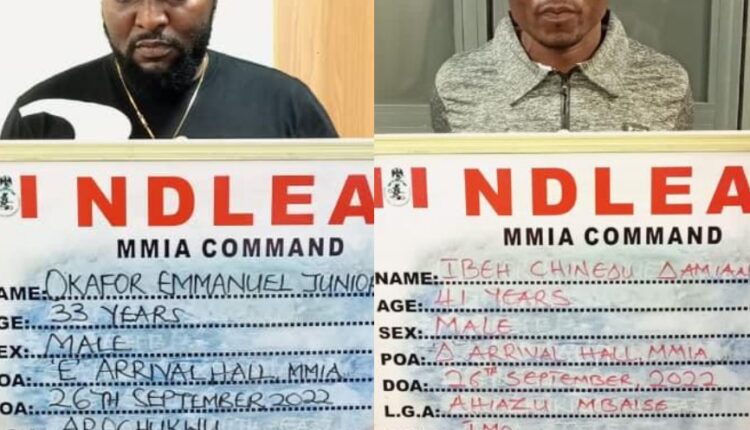 The National Drug Law Enforcement Agency (NDLEA), has arrested an ex-footballer, Emmanuel Okafor, and a Brazilian returnee, Chinedu Ibeh, after illicit drugs were found in their possession by the agency officials.

Both suspected drug traffickers were apprehended by the anti-narcotic agency officials on their arrival at the Murtala Muhammed International Airport in Ikeja, Lagos from Sao Paulo in Brazil.

While the 33-year-old Okafor was arrested with 1.40kg crack cocaine allegedly concealed in his bags, Ibeh was said to have been found with 3.20kg black cocaine popularly known as ‘Lucci’ concealed in false bottoms of his two bags.

Okafor, who is an indigene of Arochukwu Local Government, Abia State, was reported to have been arrested after anti-narcotic officers discovered he concealed the illicit substance in the handles of his bags and padded the top edges of same with the class A drug.

The Director, Media & Advocacy, NDLEA, Femi Babafemi, confirmed the two suspected drug traffickers arrest through a statement made available to newsmen on Sunday.

Babafemi said that during an interview with the retired footballer disclosed that he lace his boot in the Nigerian league for the University of Nigeria Teaching Hospital (UNTH) of Enugu Football Club.

According to the statement, Okafor played for four seasons before leaving for Sri Lanka in 2014. After playing two seasons, the Abia-born footballer moved to Brazil to boost his opportunities but could not advance his football career due to lack of official documents”.

“The Brazillian returnee, Ibeh, who hails from Ahiazu, Mbaise Local Government Area of Imo State, said he was to be paid three million, one hundred thousand naira (N3,100,000) on successful delivery of the drug in Nigeria”.