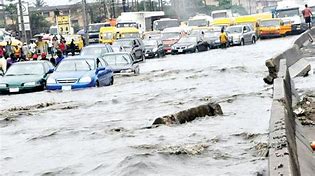 The Nigerian Society of Engineers (NSE) has proposed a technological solution to issue of flooding which usually besets Lagos during the rainy season, saying that if implemented would significantly reduce incidence of flood within the state.

The professional body explained that Lagos, being a coastal city, was prone to flooding which was further aggravated by its over 200million population and densely built edifices in the bustling business hub.

Speaking on Wednesday at the World Engineering Day Lecture and Workshop which had been organised by NSE and themed “Reduction of Flooding in Lagos: The No Dig Drainage Technology Approach and Menace of Traffic in Apapa Axis”, Ajanaku, as well as his colleagues, explained that the trenchless technology was better suited to Lagos’s needs as a cosmopolitan city, and had better capacity to adequately handle the city’s drainage needs.

He reiterated that yearly incidence of flood, especially during the rainy seasons, was as result of blocked drains which, he said apart from being inadequate to handle drainage needs of the state, also constituted waste of space and unsightly defacement of the city landscape.

The engineers stated that once implemented, the no dig drainages would prevent loss of lives and property which were recorded annually once there was heavy rainfall adding that reduction in flooding would go a long way to tackling traffic gridlock which were side effects of high surface runoffs experienced during rainy season.

Ajanaku noted that trenchless technology was not new and that it had been used to significantly reduce flood in some areas of the state such as Lekki, hinting that it had however been forgotten with more emphasis being placed on traditional surface drains which had proven to be inadequate to service the state, and country’s needs.

He said, “No dig, is old, very old indeed; India, China, Egypt, Rome and in Old Benin city in Nigeria, have adopted it and it worked effectively for them. Instead of experiencing flooding, the installed pipes simply ensure that the water is diverted to other areas where it would be needed for agricultural or other purposes”.

The civil engineer, who listed advantages of using trenchless technology as opposed to surface drainage systems, stated that the technology indicated installation, renewing and repair of underground pipes, cables and ducts and negated the need for daily evacuation of refuse from drains and that surface refuse would not get underground to block the trenches.

He said that the relining, installation or repair of such underground pipes would be done without need for digging and by using non-invasive methods which were safer for the environment than traditional methods.

According to one of his colleagues, Tunde Jimoh, who decried the state of Lagos drainage systems and urged for government to effect change to trenchless technology system, adding that such hidden and effective drainages would give the state a much needed facelift from its open drainage systems.

Jimoh agreed with his colleague that the technology would extend life of the city’s drainage system and that it was quicker, smarter, safer and cheaper for the state.

He argued that Lagos’s existing system had not only failed it, but actively contributed to incidence of flooding within the city and that once trenchless technology systems were in place, vast positive improvements would be noted through reduction of runoffs and flash flood.

He suggested that the state government should adopt the technology in densely populated areas including Lagos Island, Ebutte Metta, Victoria Island and other flood prone areas of the state.

“The conventional drainage pipe design for roads, ranges from 750mm – 1500mm or more, depending on the hydrological study of the area, rainfall intensity, run off data and other parameters required for design. The no dig or trenchless technology can be up to 2800mm in diameter,”

“Once installed, Lagosians will experience marked reduction in incidence of flash floods during the rainy season,” Jimoh said.