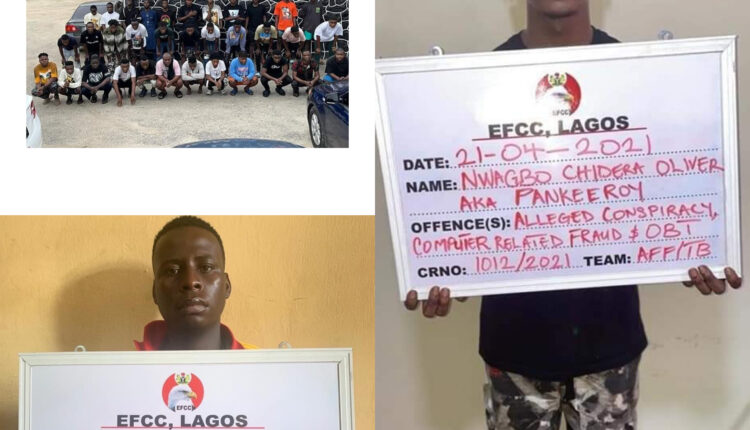 The Economic and Financial Crimes Commission (EFCC) has arrested and detained a Nigerian comedian and social media Influencer, Nwagbo Chidera, popularly known as Pankeeroy, alongside 34 other information and communications technology experts for their alleged involvement in computer-related fraud in Lagos State.

As gathered, Pankeeroy and other suspects, said to be all-male, were reported to have been arrested by personnel attached to the anti-graft agency’s Lagos Zonal Office on April 21, 2021.

Confirming the arrest, EFCC’s Head of Media and Publicity, Wilson Uwajaren, in a statement made available to newsmen on Thursday, said that the comedian and other suspects were arrested at their hideout in James Court, Lekki axis of the state.

Uwajuren stated that their arrest by the commission personnel followed actionable intelligence on their alleged criminal activities.

The spokesman further said, Pankeeroy claimed to have gone into Bitcoin scam after he suffered depression. He added that the comedian posed as a vendor who redeems bitcoin vouchers using a platform to defraud his unsuspecting victims.

According to him, investigations revealed that one of the suspects, Christian, allegedly defrauded an aged Asian-American lady of over $475, 000.

The spokesman in the statement, revealed that Christian confessed to have been posing as one Dave Federick, a 58- year- old United States national on a mission in Syria, in order to lure his unsuspecting victims and defraud them of their hard-earned money.

“Upon his arrest, a Mercedes Benz AMG GLE model worth N36,000,000( Thirty-six Million Naira) was recovered from him.

“Investigations also revealed that the suspect has N22, 300, 000. 00 (Twenty- two Million, Three Hundred Naira ) worth of Bitcoin in his blocked chain account,” he added.

Uwajuren further listed the item recovered from the suspects include exotic cars, Iphones, laptop computers, Android devices and Macbook devices. He added that the suspects would be charged to court as soon as the ongoing investigation was concluded.