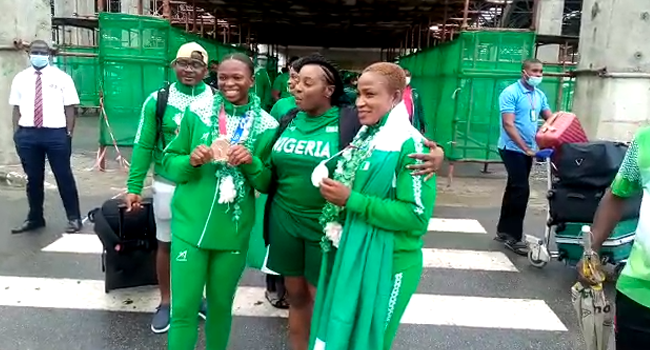 The Nigerian athletes to the 2020 Tokyo Olympics games have returned to the country, displaying the medals won during the competition held one year after the earlier scheduled date.

As gathered, the team led by the Minister of Youths and Sports, Sunday Dare, returned to the country after the Nigerian team concluded their participation at the events and was ranked 69th on the medal table comprising over 200 countries.

The athletes, who beamed with smiles, arrived at the Nnamdi Azikiwe International Airport in Federal Capital Territory (FCT) Abuja on Saturday at about 1 pm.

On arrival at the airport, the two medalists, Ese Brume, who won a bronze medal in the long jump event, and Blessing Oborududu that took a silver medal in Wrestling, were seen displaying their medals.

Addressing pressmen after the team’s arrival, Dare expressed satisfaction with the athletes’ performance during the game and assured Nigerians that efforts would be made to ensure the sportsmen and women perform better in subsequent competitions.

He added that they would be made to commence preparation earlier for the eighteenth edition of the World Athletics Championships scheduled for next year, 2021, in Oregon, United States.