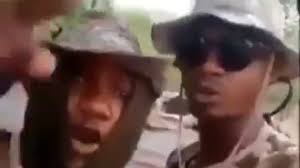 Following broadcast of a viral video post on twitter in which two soldiers made promises of attacks on women in Warri, Delta State, as reprisals for the day before’s attacks on their comrades in the region, the Nigerian Army has disclosed that it has arrested the men and is set to commence investigation into the incident.

It explained that the soldiers had been arrested at the Ikeja Military Cantonment where they served and that it was set to carry out swift investigations with aim to mete out just punishment for their wrongful conduct.

The army reiterated that the investigation proceedings would be conducted in line with military code of fairness and that its results would determine the punitive measures which would be adopted on the offending soldiers.

In a series of tweets released on its official twitter handle on Friday, the military body assured Nigerians of its commitment to civilian safety and stated that it would not tolerate such acts of impunity or indiscipline by any soldier in its ranks.

It further assured the people that the investigation would be seen through to a logical end  and that proper disciplinary measures would be employed on the offending officers.