The Nigerian Army has disclosed that no fewer than three suspected gunrunners, were killed by troops operating around Sabo Birni border town, area of  Sokoto State during an attempted attack.

The NA stated that several weapons were recovered from the terrorists after the operation carried out by the troops in the state on June 1, 2021.

Confirming the casualties figure, the Director, Army Public Relation, Brig.-Gen. Mohammed Yerima, in a statement released yesterday, said the feat was achieved after the army got credible information that gunrunners were moving weapons on foot from the Niger Republic into Nigeria.

The operation which happened on June 1, 2021, was made possible after the army got credible information that gunrunners were moving weapons on foot from Niger Republic into Nigeria.

According to the Director Army Public Relations, Brigadier General Mohammed Yerima, “The highly vigilant troops mounted a successful ambush along the suspected route close to Garin Naimaimai Village and neutralised the 3 gunrunners.

“The Chief of Army Staff Maj Gen Faruk Yahaya commended the efforts of the troops and urged them to sustain operational tempo by dominating all the illegal routes around the border areas with Niger Republic to frustrate any movement of weapons and ammunition into the country.” 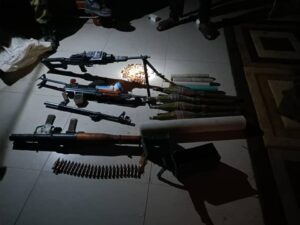