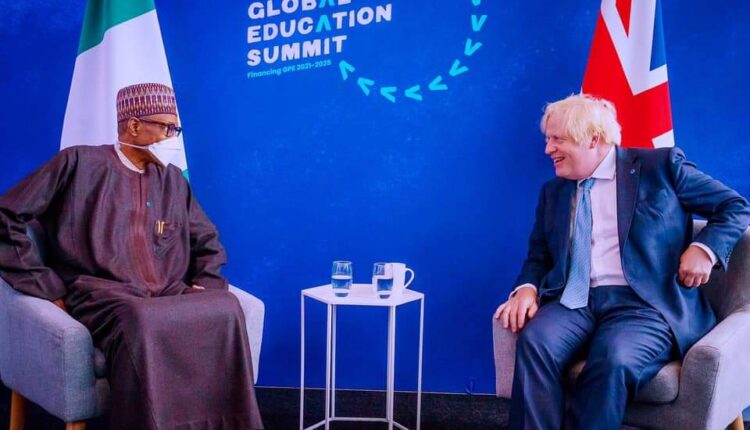 President Muhammadu Buhari and Britain Prime Minister, Boris Johnson, have appraised the war against different forms of terrorism in Nigeria and agreed that the judicial process is allowed to run its course and ensure rule of law get entrenched across the country.

They both agreed that it was important that the judicial process runs without interference, irrespective of the position, office, religious, ethnic, and political affiliations of individuals involved.

Holding bilateral talks at the sidelines of the Global Education Summit in London on Thursday, the two leaders were said to have also discussed how to increase trade between the two countries, develop solar and wind power, the leadership of the Commonwealth going forward, and other matters of mutual interest.

According to a statement from Buhari’s spokesperson, Femi Adesina, Buhari briefed the Prime Minister on Nigeria’s power needs and efforts being made, as well as initiatives geared at achieving food security.

He also reviewed the security situation in the different regions of the country, while PM Johnson pledged Britain’s preparedness to lend a helping hand. “We are available to help,” he said.

Earlier, the president emphasised the importance of education across Nigeria, stressing that: no Nigerian parent jokes with education, as they know that if their children or wards missed the opportunity of being educated, they have missed a lot.

Speaking during a panel session at the Global Education Summit in London, Buhari said that the size and population of Nigeria are challenges for any administration, adding that despite the setback, the government and people realize that education was the starting point for success.

“You can’t succeed outside your educational qualification. Anybody who missed education has missed everything. Nigerians are acutely aware of the priority of education, and parents are making sacrifices to ensure that their children and wards get educated,” Buhari was quoted to have said while on the panel with Presidents Nana Akufo-Addo of Ghana, Faure Gnassingbe of Togo, Uhuru Kenyatta of Kenya, and Lazarus Chakwera of Malawi.

As stated, each president spoke on the peculiarities of the education sector of his country, and how budgetary provisions would be increased to ameliorate the situation. They all raised their hands as a sign of commitment to that resolution.

The Guild had earlier reported that Buhari earlier committed to raising the budget for education by 50% in the next two years, and the country would attain 100% increase by 2025.