1m Lagos students to get E-learning assistance after school… 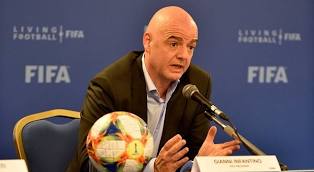 In line with the Fédération Internationale de Football Association, (FIFA)’s zero-tolerance stance against discrimination and violence in the game, Nigeria, United States of America, Italy, and 30 other member countries have been slammed with different fines totalling $1.5 million, after its officials and fans across the countries were found to have contravened rules and regulation set to maintain sanity during matches.

According to FIFA, the sanctioned countries were been punished due to the abusive behaviour by their respective supporters during the preliminary competition for the FIFA World Cup Qatar 2022 in the first quarter of this year.

Through a disciplinary sanction document published on their official website on Monday, the world soccer ruling body, FIFA, imposed a $154,000 fine on Nigeria following the unruly behaviour of Nigerians at the Moshood Abiola Stadium on March 29.

The fans were said to have gone violent to express their disappointment at the end of the second-leg Qatar 2022 World Cup play-off between the Super Eagles and Black Stars of Ghana.

It disclosed that Nigeria earned the sanction due to a breakdown of law and order after a 1-1 draw which earned Black Stars a slot at Qatar 2022 World Cup due to an away goals rule.

Also, Apart from the $150,000 fine, FIFA disclosed that Nigeria would play its next home match without spectators as it would be done behind closed doors.

As gathered, in a dispatch by FIFA, the body’s Disciplinary Committee decried the poor organisation of the match for lack of order and security at the match and that there was a‘ failure to implement existing safety rules and failure to ensure that law and order are maintained in the stadium, invasion of the field of play and throwing of objects’.