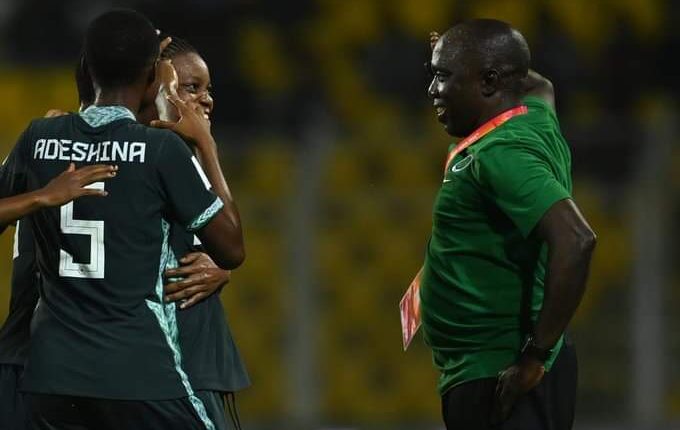 The Nigerian U-17 female team, Flamingos, has qualified for the quarter-final stage of the ongoing Federation of International Football Associations (FIFA) world cup after defeating their Chilean opponents by 2-1 in India.

Nigeria’s team qualified for the next stage following it’s second-place finish on the log after their third match played in the tournament.

On Monday, the Flamingos, who needed just a draw against the Chileans, got an early goal through Captain Blessing Emmanuel, whose shot from the edge of the box beat the Chile goalkeeper. The assist came from Opeyemi Ajakaye. Mosaku Bisola doubled the lead in the 82nd minute after the Flamingos had missed a myriad of chances.

However, the Chileans got a consolation goal from a penalty scored by Tali Rovner. VAR and referee Myriam Marcotte took several minutes to conclude it was a penalty. The referee booked Onamuzo Edafe for the handball.

The Nigerian coach, Bankole Olowookere, made just one change to the squad that hammered New Zealand as Captain Alvine Dah-Zossu was replaced by Edafe in the right wing. Meanwhile, Amina Bello, who had played on the flank, partnered with Ajakaye upfront.

The Flamingos started impressively and took the lead in the fourth minute through Emmanuel, whose shot found a way past two defenders and the goalkeeper.

Having started early, Ajakaye and Bello created many goal-scoring attempts for the Nigerian ladies in the first 15 minutes of the game.

In the 17th minute, Bello’s attempt following a thorough pass from Ajakaye was parried for a corner by Catalina Alvarado.

The Flamingos continued to look for a second goal, with another attempt from Ajakaye at the left-side corner toward the box being pulled out by Alvarado. However, the resultant attempt from Bello was cleared off the line by Catalina Figueroa.

The Chileans with 45 minutes left for an extension in the competition began a search for an equaliser with Paloma Bustamante’s outer shot went sideways in the 47th minute.

However, Ajakaye and her teammates continued to waste chances and the forward’s strike was well saved by Alvarado in the 54th minute.

Meanwhile, Amina’s looped ball following a headed pass from Afolabi, who stole Alvarado’s miscued throw, was parried to a corner by the Chilean Goalkeeper in the 69th minute. Two minutes later, Ajakaye was again denied by Anais Cifuentes.

Ajakaye, the team’s highest goal scorer in the qualifiers, has not scored for the Flamingos in the competition, missed a glorious chance to score her first after her shot hit the woodwork in the 73rd minute following a pass from Edidiong Etim.

In the last 10 minutes of the game, Bello and Ajakaye saw Alvarado save their goal attempts. Etim also failed to convert a one-one attempt as her shot went sideways.

However, the search for a second goal finally came through for the Flamingos when Amina Bello’s header from Usani’s free-kick was tapped-in by Mosaku at the far post. It was an early birthday gift for the winger who will turn 16 in a few days.

The Chileans were awarded a contentious penalty following an Edafe handball to Figueroa’s shot, which halved the two-goal lead. The decision was subject to a VAR review which lasted over four minutes before the referee pointed to the spot for a penalty that was well-taken by Tali Rovner.

The Flamingos will confront either the USA, Brazil, or Morocco in the quarterfinal on Friday at 12 noon.

JUST IN: Benzema wins first Ballon D’Or award after edging out Mane, others