Presidential democracy and the culture of debate 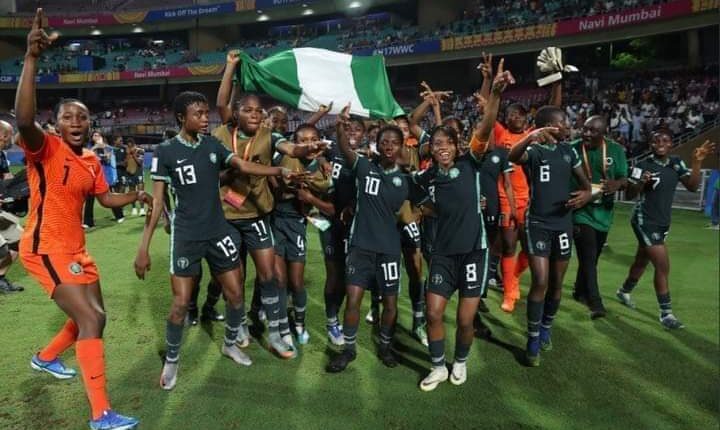 The Nigerian U17 female team has won their first-ever Federation of International Football Association (FIFA) World Cup bronze medals after defeating their opponent, Germany, through a penalty shootout following a dramatic 3-3 draw.

Flamingos claimed the title after successfully converting three of their five penalty kicks while Germany scored two of its kicks during the third-place encounter played in Mumba, India.

Nigeria took the lead in the 21st minute on Sunday through power forward, Opeyemi Ajakaye, after she got the better of Eve Boettcher from a flowing move during the game.

The Germans would have equalized but efforts of Flamingos goalkeeper, Faith Omilana, who denied Gloning a scoring opportunity five minutes later, and Nigeria should have increased its tally to 2-0 in time-added-on during the first half only for Chidera Okenwa to miss a one-on-one with Boettcher.

The Flamingos continued the second half from where they left off in the first period and were more fortunate this time, as Aminat Bello headed powerfully into the net from Miracle Usani’s corner kick in the 48th minute.

It was soon 3-0, as Edidiong Etim, only four minutes on the pitch in place of Okenwa, scored another goal, to put pressure on the Germans who won the encounter between both teams during group stage.

Germany, staring at annihilation, fought back gamely and reduced the scoreline in the 73rd minute when Veit Jella pulled one back. And five minutes later, Ajakaye had an opportunity to make it 4-1 but faltered.

Paulina Platiner made it 3-2 with five minutes to go and on the dot of 90 minutes, Loreen Bender, tied the scoreline to compel a third penalty shootout for the Flamingos in the knockout phase of the tournament.

It was the dice of their triumph against USA in the quarter-finals that Nigeria picked, rejecting the losing dice against Colombia in the semi-final.

Substitutes Blessing Sunday and Edidiong Etim and Player-of-the-Match Opeyemi Ajakaye scored from the spot for Nigeria, but Tumininu Adeshina missed but it did not matter as Pauliner Bartz missed a crucial kick for Germany.

Victory made it a joyous Sunday for Nigeria, and history-making Coach Bankole Olowookere said: “I am a very happy man that we did not leave India empty-handed. It has been a great tournament with a lot of lessons learnt. We give God the glory.”

President of the NFF, Ibrahim Gusau, who has been with the team in India since the quarter-final stage, was delighted with the triumph.

“This is a victory for the Government and good people of Nigeria. The girls and their technical and administrative crew did very well to win something from this tournament and give Nigeria joy. I commend their determination and commitment to a noble goal.”

Both teams started the competition playing against each other, with the Germans coming back from a goal down to win 2-1 at the Pandit Jawaharlal Nehru Stadium in Goa.

The Europeans, who lost by a 90th minute goal to Cup holders Spain in Wednesday’s second semi-final, started the brighter side and had the ball in the net through Marie Steiner in the 5th minute off a cross from Laura Gloning. But the Video Assistant Referee ruled it offside.