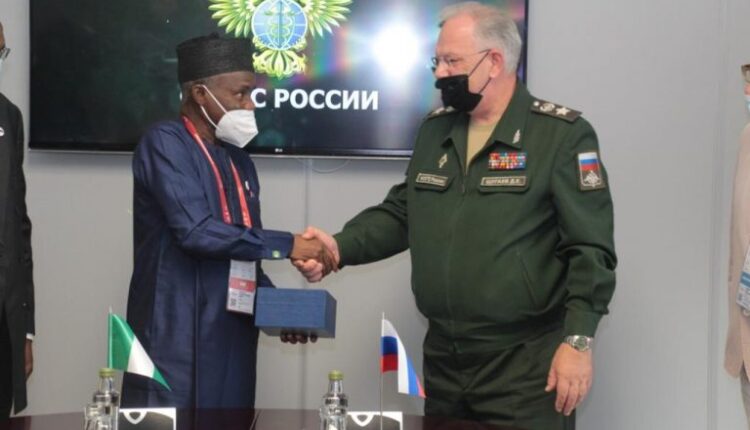 The Federal and Russian Governments have disclosed that both nations have agreed to become working partners after signing a military-technical cooperation agreement bordering on military equipment supply and servicing to enhance response against terrorists in both nations.

As stated, The agreement provides a legal framework for the supply and servicing of military equipment, training of personnel as well as technology transfer, and exchanging of notes that would guide military response, civil-military engagements.

Nigeria’s Minister of Defence, Maj.-Gen. Bashir Magashi (rtd.) who led a delegation of top military officials to Russia on an official assignment, signed on behalf of the Nigerian government while the Director, Federal Service for PliIitary-Technical Cooperation, Dmitry Shugaev, signed on behalf of Russia.

The Nigerian Ambassador to Russia, Prof. Abdullahi Shehu, Chief of the Naval Staff, Vice Adm. Auwal Gambo, and representatives from the army and air Force formed the Nigerian delegation at the signing ceremony in Russia recently. The new agreement marks the termination of the 20-year long similar agreement entered into by both countries on March 6, 2001.

Speaking after the brief ceremony, Amb. Abdullahi Shehu expressed appreciation to the Russian authorities, reiterating that Nigeria was not looking for alternatives but for complementarity and mutual benefits.

On his part, while declaring open the 7th International military-technical Forum – Army 2021, President Vladimir Putin of Russia stated that contracts for the supply of Russian military equipment had been concluded.

“Massive mutually beneficial portfolios of contracts for the supply of Russian military goods are concluded on the forum‘s sidelines every year. The forum has on display over 28,000 units of modern military arms and equipment ranging from small firearms to artillery, tanks, and military combat aircraft.

“Our army and navy are being modernised at a fast pace as they receive the latest-generation military assets. For example, the share of modern weapons in the strategic nuclear forces is over 80 per cent now. This is more than in other nuclear countries,” he said.

Putin also projected the creation and improvement of combat capabilities of the advanced military equipment, such as the Kinzhal hypersonic air-launched missile system and the Okhotnik long-range unmanned aircraft were making progress.

“The Agreement on military-technical Cooperation between both countries provides a legal framework for the supply of military equipment, provision of after-sales services, training of personnel in respective educational establishments, and technology transfer, among others. The signing of the Military-Technical Cooperation Agreement is a landmark development in the bilateral relations between Nigeria and the Russian Federation,” he said.

It would be recalled that in 2017 and 2019, the Russian government signed military cooperation and trade agreements with Nigeria. The 2017 agreement allows Nigerian servicemen to be trained in Russia’s military educational establishments while both countries will exchange peacekeeping experience in fighting piracy and terrorism.

In the 2019 agreement, the cooperation extended from military collaboration to oil and gas as well as rail development and trade, among others. The agreement which was then signed by President Muhammadu Buhari on the sidelines of the Russia-Africa Summit also sought the advancement of a nuclear power plant in Nigeria.