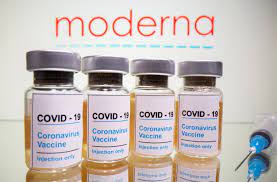 The Federal Government on Monday took delivery of another tranche of over four million doses of Moderna COVID-19 vaccine doses donated to the country by the United States.

As gathered, the new doses would be deployed to augment the existing vaccination programme against the deadly respiratory disease and build on the gains already recorded.

The representatives from UNICEF and USAID officially presented the vaccine at a ceremony in Abuja in line with the global efforts to flatten the virus curve across the country. It was learnt that the vaccines arrived in Nigeria on Sunday via two planes.

Nigeria had earlier kicked off its COVID-19 vaccination program in April after receiving 3.9 million doses of the AstraZeneca vaccine from the COVAX initiative.

Covax was set up to ensure the equitable distribution of vaccines, particularly to low-income countries, and has already delivered more than 80 million doses to 129 territories.

The Moderna vaccines, which were approved by NAFDAC in July, are expected to boost the country’s vaccination programme after the virus has killed 2,149 people and infected nearly 174,000 in Nigeria.

Last month, the Nigeria Centre for Disease Control said that it had detected the Delta variant, putting officials on alert for the third wave of infections in the country.

In June, Nigeria barred passengers who are not citizens or permanent residents from entering the country if they have been in South Africa in the past 14 days.