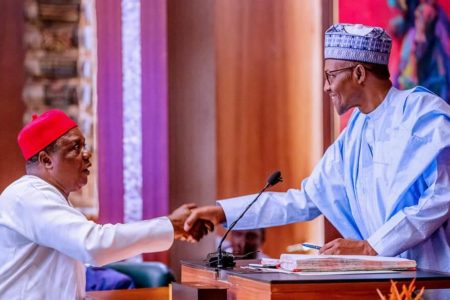 The Revenue Mobilisation Allocation and Fiscal Commission (RMAFC) has disclosed that plans have been concluded for review of Revenue Allocation Formula (RAF) and that the new sharing formula would be ready before the end of 2021.

Aside from the revenue sharing formula, the body stated that it would also commence the review of remuneration for political and judicial office holders immediately after the Federal government release fund for it.

RMAFC Chairman, Engr. Elias Mbam, said that arrangement for review of sharing formula has been concluded and that the review was targeted at equitable distribution of the accrued revenue into the federation account to the three tiers of government

Announcing the plans in Abuja on Monday when members of the National Assembly Service Commission led by Ahmed Khadi paid him a courtesy visit at his office, Mbam noted that the RAF review would first concentrate on the vertical formula which has to do with sharing of revenue between Federal, State and Local governments.

The RMAFC Chairman also told the legislators that the federal, state, and local governments review would be followed up by a horizontal formula which also has to do with sharing among states and among local governments

According to Mbam, RMAFC is one of the 14 executive bodies saddled with the statutory function of reviewing from time to time the revenue allocation formula and principles in operation to ensure conformity with changing realities alongside monitoring appropriate revenue accruals to the federation account by the revenue-generating agencies.

He added while the review of remuneration for judicial and Executive office holders in the federation was subjected to further legislation by National or State Assemblies for approval, such approval would “not be more than what RMAFC has recommended, RMAFC’S determination for legislatures at federal, state, and local government is final”.

According to him, the new RAF will be ready before the year runs out and will take into consideration, security, environmental challenges, and many issues which need to be considered in addition.

“All the variables, all the issues will be taken into consideration in the review. A new piece of advice will be given to the President and that is exactly what we have done,” he said.