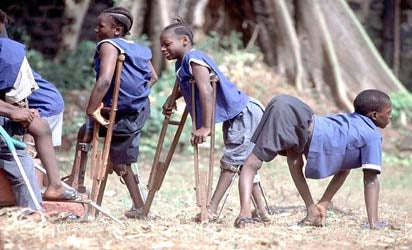 Nigeria and other African states overseen by the African Regional Office of the World Health Organisation (WHO) have disclosed that they are committed to ending all remaining forms of polio through tracking the virus and detailing gains recorded against it towards its total eradication.

They explained that though the African Region had been certified free of wild poliovirus one year ago, after four years without a case, the region had begun recording outbreaks of a Vaccine-Derived PolioVirus (cVDPV) which was spreading in African communities where too few children have received the polio vaccine.

As stated, the cVDPV is a weakened strain of the virus that has changed over time and behaves more like the naturally occurring poliovirus. WHO said, in a statement yesterday, that the commitments came at the dedicated 71st meeting of the WHO Regional Committee for Africa.

The global health body noted that since 2018, 23 countries in the region have experienced outbreaks and more than half of the global 1071 cVDPV cases were recorded in Africa. According to WHO, cases increased last year partly because of disruptions to polio vaccination campaigns caused by the outbreak of COVID-19 pandemic.

The body stated that countries at the meeting discussed how they would begin implementing the new Global Polio Eradication Initiative (GPEI) 2022-2026 Strategy, which was launched in June to urgently stop the spread of cVDPVs.

“Tactics and tools include advancing the speed and quality of outbreak response, such as through the rapid deployment of WHO surge staff. It also include improving polio vaccine uptake by integrating polio campaigns to reach children who have never been vaccinated.

“Also, broadening the rollout of the novel oral polio vaccine type 2 (nOPV2), a new tool that could more sustainably end outbreaks of the most prevalent type 2 cVDPV,” the statement said.

The WHO Regional Director for Africa, Matshidiso Moeti, said that till date, six countries in Africa have rolled out the vaccine with close to 40 million children vaccinated and no concerns for safety noted.

She added that ministers have also committed to regularly reviewing progress via the scorecard, which wiould track the timely implementation of high-quality polio outbreak response, introduce the novel oral polio vaccine type 2 (nOPV2) for broader use and transition polio assets into national health systems in a strategic, phased approach.

“Our success in ending wild poliovirus in the region shows what is possible when we work together with urgency,” Moeti said. According to her, since July 2020, almost 100 million African children have been vaccinated against polio.

While COVID-19 threatened this success, Moeti argued that it was possible to overcome the final hurdles, saying we have the know-how, but it must be backed by committed resources to reach all under-vaccinated communities.

Also discussed at the meeting were supporting immunisation and disease surveillance once polio is eradicated, which will be achieved by transitioning polio infrastructure into countries’ health systems.

On his part, the Chair of Rotary’s National PolioPlus Committee in Nigeria, Dr Tunji Funsho, called for increased political and financial commitment by governments and partners. According to him, they should “not only curb outbreaks swiftly, but to also scale up vaccination coverage and give children lasting protection against this preventable disease.”