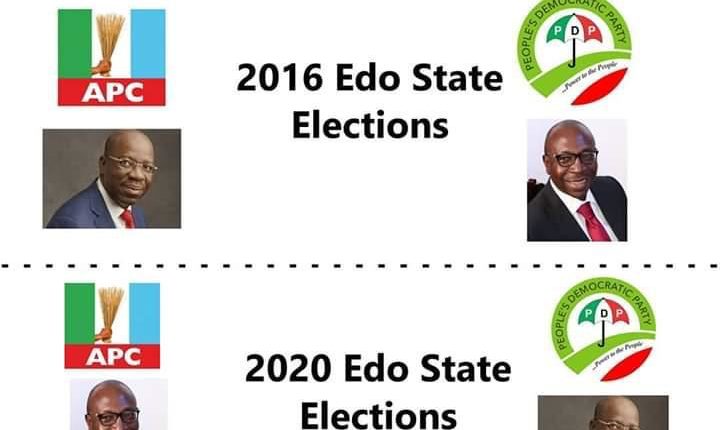 Yesterday, we gleefully celebrated their defection from PDP to APC.

Today, we derisively mock their defection from APC to the PDP – in what has become a vicious cycle of political tragicomedy.

Yesterday, we wined and dined with them and eulogized their political exploits with willful amnesia to their atrocious record of corruption and impunity.

Today, with their defection, we have regained our “lost” memory and, already, calls for their probe by anti-corruption agencies are growing in decibels.

It is a perfidious revolving door in a political party system bereft of true democratic ideals, values, and principles, and without any defining philosophical or ideological features, a system that operates purely on a cult of personalities driven by predatory self-interest.

The revolving door is a reason our political leaders seem to lack the maturity and negotiation skills of ten years olds in the management of their parties’ internal affairs. Why work hard to resolve disagreements when you can just easily use the revolving door to the other party?

Meanwhile, the common good of the people is trampled under the brutal footsteps of the gladiators.

Who will save the people? Only the people can save the people. The people must quit auctioning their natural and political sovereignty for ‘judas’ shekels’ during primary and general elections. They must reclaim the initiative to discipline and direct political governance to their own priorities.

The people must shut the revolving door. Until such a time when we attain political evolution nurtured and defined by democratic values and ideological proclivities, there’s a need for some kind of legally instrumented restriction of politicians that defect from one party to another from contesting for public office during the same electoral cycle in which they defected. Such restriction should be unwaiveable.

That may not shut the door but it may stop it from revolving as fast.

Felix Morka is a lawyer, socio-political analyst that is passionate about the development of Nigeria.