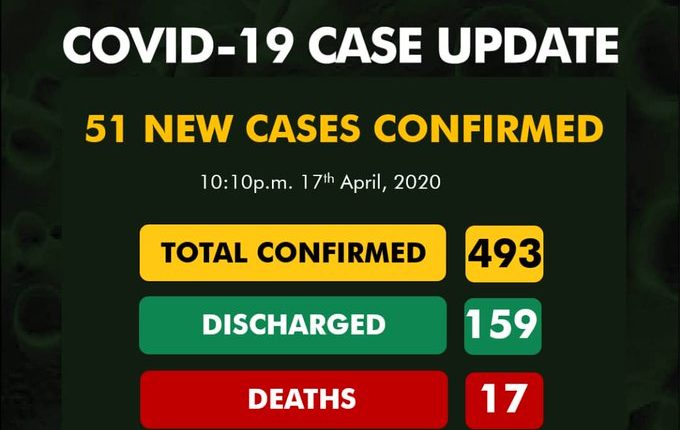 The Federal Government has disclosed that number of coronavirus incidents in the nation has recorded a sharp spike to 493 recorded cases, following incidence of 51 new patients in several states across the country.

It explained that the rise came as a result of 51 newly confirmed cases of the global pandemic in the nation, and that the disease incidents had occurred in some affected states of the federation.

The Nigerian Centre for Disease Control (NCDC) revealed that the affected states included Lagos state with 32 new cases, Kano with six, Kwara with five, the Federal Capital Territory (FCT), Oyo and Katsina with two incidents each, as well as Ekiti and Ogun states with one new covid19 patient each.

The NCDC confirmed the surge in new cases through a post on its Twitter page on Friday, adding that the confirmed 493 patients included 159 persons who had been successfully treated and discharged from various isolation centres around the nation, as well as 17 casualties of the deadly illness.

The centre listed a breakdown of total coronavirus cases in each affected state, saying that Lagos state had a total of 283 recorded covid19 cases, FCT had 59, Kano 27, Osun 20, Edo 15, Oyo 15, Ogun 10, nine in Kwara, nine in Katsina 9 and six in Bauchi.

It added that the states also included Kaduna and Akwa-Ibom with six confirmed cases each, four in Delta, Ondo and Ekiti with three cases each, Enugu, Rivers and Niger with two each, as well as Benue and Anambra states with one recorded coronavirus incidents each.

The disease control center, while assuring Nigerians of its commitment to carrying out adequate testing of suspected patients, as well as community surveillance with aim to curb further spread of the global pandemic in the nation, said that 7,153 samples had so far been tested for coronavirus in the country.

It encouraged people to take responsibility for their health seriously and adhere to advised covid19 preventive measures.