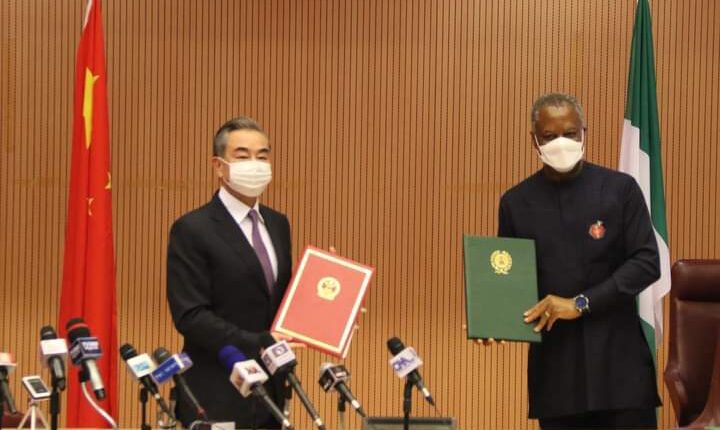 The Minister of Foreign Affairs, Geoffrey Onyeama, has disclosed that he would be leading Nigeria’s delegation to the People’s Republic of China in continuation of efforts aimed at strengthening bilateral relations with the Asia nation, saying both countries would be focusing on areas of security and economic development.

Other areas of interest, he said, would include politics, defense, trade, and security cooperation, education, technical cooperation, consular matters among others for the advancement of both countries among committees of nations.

The minister said that security, particularly anti-insurgency and other measures against insecurity across the country would be prioritised during the meeting, adding that President Muhammadu Buhari-led administration was ready to explore all avenues in protecting the lives and property of Nigerians.

Giving the details of China’s State Councilor and Minister of Foreign Affairs, Wang Yi, two-day official visit to Nigeria, through a press release on Wednesday by the ministry’s spokesperson, Ferdinand Nwonye, Onyeama said that the Nigeria team would also be replicating such visit.

He noted that Yi, who led a high-powered Chinese delegation has departed Nigeria after a successful two-day official visit to Abuja, from Monday 4 January 2021, and that plans are being concluded for a visit to China that would be announced at later date.

“The Honourable Minister of Foreign Affairs is expected to reciprocate the visit at a date to be decided in the future, pursuant to strengthening the bilateral relations between Nigeria and China,” the statement said.

Explaining further, Onyeama said that while the Yi-led delegation was in Nigeria, bilateral discussions on strengthening already existing cordial relations between Nigeria and China and shared information and knowledge pursuant to the interests of both countries in multilateral fora were held.

“The Hon. Ministers of Transportation, Industry, Trade and Investment, and Health participated in Meeting, together with representatives of the Ministry of Aviation and the Chief of Air Staff, as well as a number of other senior government officials. The Meeting focused on the following issues: political; trade and economic; defense and security cooperation; education; technical cooperation; and consular matters; to mention a few.

“Hon. Minister Onyeama and his guest signed a Memorandum of Understanding on the establishment of an Intergovernmental Committee between the Governments of the Federal Republic of Nigeria and the People’s Republic of China and fielded questions from journalists in a joint press conference,” the statement added.