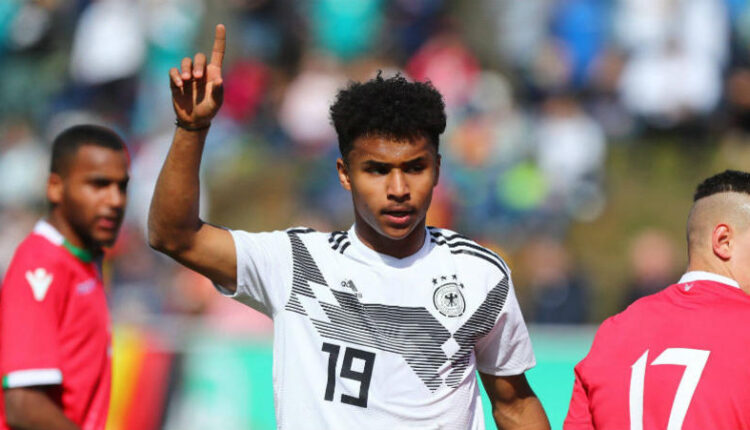 The forward, who plies his trade in the Austrian league with Red Bull Salzburg, came into the match at 72 minutes, after the team’s coach, Hansi Flicks, decided to substitute the Bayern Munich winger, Gnabry, ahead of their next encounter with Iceland on September 8, 2021.

And 19 minutes after his introduction into the game, Adeyemi added his name on the scorer sheet in 91st minute of the game and leap-frog Armenia to the top of the group, with their visitors now two points behind in the second spot. They were followed by Romania, who were third with nine points, one ahead of North Macedonia.

Earlier after the coach announced his name into the 26-man team for the three matches, the teenager, who was tipped to represent the Super Eagles of Nigeria, went on social media to show his excitement.

He said: “First a Champions’ League qualification at club level followed by a call-up to the senior team at the national level. What a beautiful week in my career as a footballer!. I am grateful to everyone that has helped me on this journey of becoming. Danke!”

Born in Germany to a Nigerian father and Romanian mother, the youngster’s talent was first noticed by Bayern Munich before he continued his football education at SpVgg Unterhaching.

He joined RB Salzburg in 2018, albeit, he was loaned to Liefering to gain first-team experience and he was recalled to the Austrian club thanks to his impressive performances.

There, he became a regular in Jesse Marsch’s squad, helping them to win two Austrian Bundesliga titles as well as two Austrian Cup crowns.

On the international scene, he represented Germany at U-16 and U-17 level before his promotion to the U21 squad – where he played a starring role in the 2021 Uefa European Under-21 Championship.

Having been named on the 2021 NXGN list of the world’s top footballing wonderkids, Salzburg sporting director Christoph Freund backed him to have a “great international career” with Germany.

“Karim has great potential and exceptional weapons, with his speed and scoring ability,