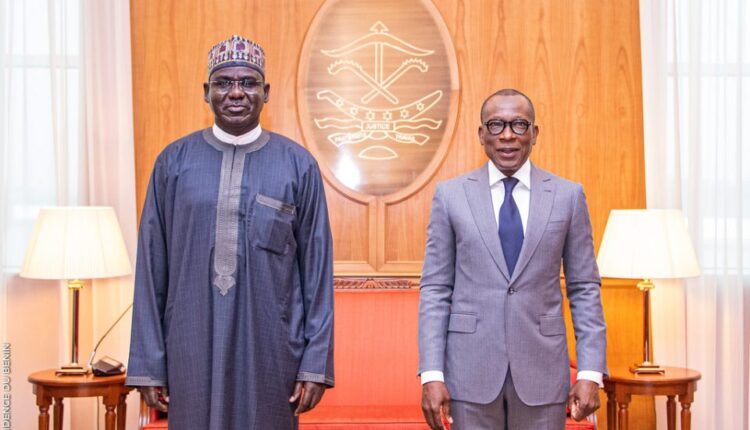 The Federal Government and Benin Republic Government have perfected modalities and put in place necessary measures to strengthen bilateral ties between both countries despite the ongoing trial of Yoruba activist, Sunday Adeyemo, popularly known as Sunday Igboho, in Cotonou, the Benin Capital.

As gathered, the duo has concluded talks on effective security strategy, prevention of border conflicts, and eliminate undue interference through strong bilateral ties between Nigeria and Benin Republic.

With the new cooperation, the apex government may have given Benin a free hand and bilateral clearance to thoroughly investigate and prosecute Igboho, a poster boy of the secessionist agitation for Yoruba Nation, who has been in detention and facing criminal charges in the country.

The collaboration and possible agreement on the matter may have been reached when Nigeria’s Ambassador to the Benin Republic, Lt. Gen. Tukur Buratai (retd.), met with the President of Benin Republic, Patrice Talon, yesterday in Cotonou.

The meeting was said to have taken place after Buratai, who is a former Chief of Army Staff, alongside Germany, Ghana, Gabon, and Norway Ambassadors officially presented their letters of credence to President Talon.

Giving details of the meeting, the Beninese Government, through a statement, revealed that the Head of State granted audience to each of the new ambassadors and discussed with them the revitalization and strengthening of bilateral cooperation between the countries.

According to the statement, Talon also received a brief update on the state of cooperation between Benin, Nigeria, and the other countries. “The President of the Republic also took the opportunity to invite the new Ambassadors to work more on consolidating and strengthening the warm relations that already exist between their countries and Benin,” the statement added.

The Guild had earlier reported that may face lengthy jail terms should the Cour D’Appel De Cotonou found him guilty of fresh criminal charges preferred against him by the Benin Republic Government.

The country had filed a new criminal case against the embattled agitator, said to be bordering on connivance with others to carry out alleged criminal acts in the country with his appearance in Benin before eventual arrest.

Confirming the new charges, Igboho’s Benin Republic-based lawyer, Ibrahim Salami, noted that his return to cell followed the new criminal charges and that the new case was not connected to his alleged case with Nigeria, but with the government of Benin.

Salami, one of the nine Cotonou, Benin Republic-based lawyers of Igboho, said that contrary to the new criminal charges preferred against his client by Benin, the team of lawyers was expecting extradition charges from the Nigerian government against the activist while in court on Monday.

Giving detail of the court rulings in an interview with BBC, he disclosed that the new charges preferred against the Yoruba Nation agitator include illegal migration, dubious connivance with immigration officers, and an attempt to cause civil unrest.

Salami, who is also a law professor in the country, noted that the new charges summed up as criminal charge was a serious offense in Benin and that Igboho had been remanded to allow police to conduct a thorough investigation into the allegations before ruling.

“They also want to know how long he has been in Benin republic and his plans in the country. They also raised a charge on whether he wants to come and cause unrest or social disturbance in Benin Republic,” the lawyer said.