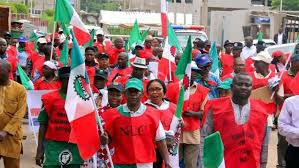 Niger State workers have embarked on an indefinite industrial action to protest government’s non-payment of minimum wages, inspite of existing agreements on implementation of the new national minimum wage and payment of other entitlements to workers.

They alleged that the state government was insensitivity to workers welfare and this made it mandatory for labour to embark on a strike action to show their displeasure, make their demands known to the government, and prove need to consider workers welfare as priority.

In a statement jointly issued to newsmen yesterday by Nigeria Labour Congress (NLC) Chairman, Yakubu Garba, and Trade Union Congress (TUC) Chairman, Yunusa Tanimu, directive that workers should not return to work untill all demands have been met.

Garba and Tanimu recalled that a 21-day ultimatum of industrial action which had been issued by labour to the Niger state government had elapsed with no sign from government that it intended to hearken to voice of labour and pay what was due to workers, and that this had informed decision to begin the industrial action.

They explained that the intended strike was not meant to inconvenience members the public, but to reassure people of Niger state that they still had labour unions which were willing to fight for rights of workers, and make sure that government remained accountable to its people.

“We write to formally inform you that all civil servants in Niger state are by this notice directed to proceed on an indefinite strike action with effect from midnight February 4, 2020,”

“This industrial strike will be comprehensive, no sector exempted, and will remain in force till the state government demonstrate a clear and adequate commitment to tackling lingering issues bothering on workers’ welfare”.

Garba and Tanimu stated labour’s demands from government, which included, the immediate implementation and consequential payment of N30,000 minimum wage, its expected percentage increases as agreed upon by the federal government and labour, and full payment of accrued arrears to all workers at both state and local government levels.

They also demanded immediate resumption of payment of outstanding annual leave grant for the year 2019, to deserving workers at both state and local government levels, as well as a clearly stated commitment from the state government on pension policy in the interest of all workers.

“We apologize for any inconveniences this might cause the public, and hereby call on all citizens and residents of Niger State to support us in this fight for the good and welfare of workers in our state,”

“We are open to dialogue with government as our aim is not to destroy the state but seek for resolution to matters concerning workers’ welfare as soon as possible”.