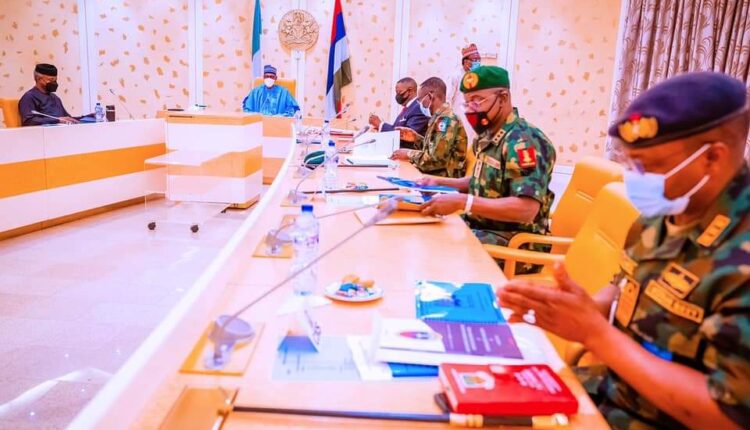 President Muhammadu Buhari has diclosed that he would not hesitate to make changes among the nation’s service chiefs and security agencies bosses who failed to deliver should insecurity across the country persists, saying he was ready to make needed sacrifices in securing the nation.

He added that while the recent changes of service chiefs was to ensure the country win the war against terrorism and other forms of insecurity, other changes would also be made if performance timeline set for military bosses were not met.

This, among other measures, the president said, were been taken to ensure normalcy returns to nooks and crannies of Nigeria, noting that he would not be rounding off his administration as a failure at the end of his second term in office in 2023.

Buhari disclosed this on Thursday while presiding over a crucial security meeting with all the nation’s security chiefs and relevant cabinet ministers where counter-insurgency strategies were discussed.

In attendance at meeting were Vice-President Yemi Osinbajo, Chief of Staff to the President, Secretary to Government of the Federation, Ministers of Defence, Justice, Interior, Police and Foreign Affairs as well as the National Security Adviser.

Others at the meeting held at the Presidential Villa were the service chiefs led by the Chief of Defence Staff, Inspector General of Police, Directors General, Department of state Services and The National Intelligence Agency, Chief of Defence Intelligence and other relevant stakeholders.

The meeting was summoned to critically analyse the prevailing challenges of security bedevilling the country with a view to charting the best way forward. The nation’s security forces had in the recent times taken the battle more robustly to insurgents, bandits and all other criminals troubling the country.

Briefing journalists after the crucial closed-door meeting that lasted over five hours, the National Security Adviser (NSA), Maj-Gen. Babagana Monguno, said that after the president was briefed on the recent onslaught against the terrorists, he was firm in his resolve to win war against insurgency and informed the service chiefs to work towards achieving the feat.

“The President was briefed, the President is quite happy that there’s been a tremendous success, especially with the advent of the new service chiefs and Inspector-General of Police and he’s also made it very clear that he’s not ready to exit government as a failure; he is not going to tolerate that.

“He’s made changes and he’s ready to make further changes if he is not satisfied. He is completely determined to ensure that there’s a turnaround in the fortunes in the theatre of operations,” Monguno quoted the president as saying.

Furthermore, Monguno hinted that the meeting briefed Buhari on the current security situation in the country, especially on happenings from the last meeting till the latest one.

“It is evident that a lot of successes have been recorded and large numbers of people are surrendering in the North East as a consequence of the relentless efforts of the Armed Forces, intelligence and security agencies.

“We’ve never had such large numbers of people defecting from the other side back to the Nigerian side, mainly as a result of many issues within the theatre, issues of infighting among the various factions of the terrorist groups.

“But the new drive of the Armed Forces, the police, the intelligence agencies, there’s been greater cooperation, greater synergy, intelligence sharing, as well as our partners in the regional intelligence fusion unit,” he added.

The Guild had in March reported that Buhari mandated the newly appointed service chiefs to speed up their actions in freeing the country from the current state of insecurity as part of measures aimed at protecting Nigerians across the nation.

He said that it was imperative for the nation’s top officers to hit the ground running in ensuring normalcy returns to all nooks and crannies of the country such that would end the insecurity apprehension currently taking center stage in the nation’s discourse.

Buhari said that the new service chiefs have before them few weeks to prove themselves worthy and justify the confidence reposed in them with their new roles such that Nigerians would heave a sigh of relief across the country.