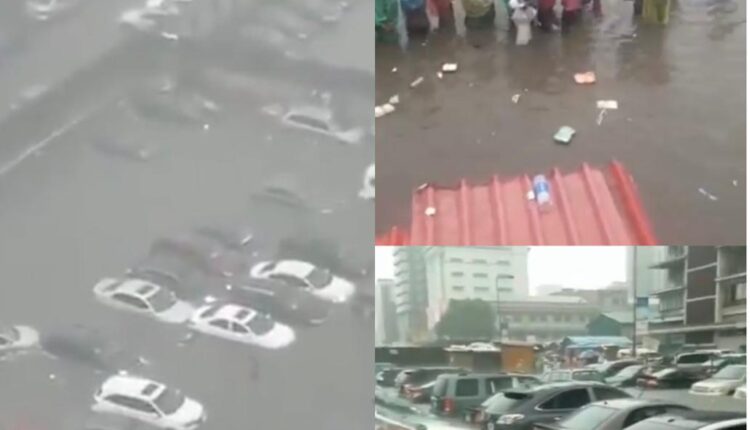 Residents across Lagos Island, Adeniran Ogunsanya, Lekki, Ajah, Ogba, among other flood prone areas in Lagos State, might have to begin arranging for emergency shelter as a replacement for their permanent place of abode after Friday heavy downpour that started on a lighter mode, intensified and wrecked homes and roads in the state.

Aside from permanent residents in the listed areas, Lagosians working in the areas, particularly in Lagos Island and Ikeja axis may have difficulty navigating their ways back to their respective places of abode after several hours of downpour wrecked road networks in the area with accompanying traffic gridlock.

Away from the flooded roads, a popular parking lot in Marina area, identified as Batola Park, has been submerged with flood with cars parked inside the property filled with rainwater and some overrun by the stagnant water as seen in a video clip circulating online.

Before getting to their destinations, some motorists and commutters may be spending several hours on the roads with ensuing traffic across the state resulting from long hours of rainfall and accustomed Fridays rush hours in the state.

Although, the situation may not be entirely new for Lagosians, the possible hike in transport fare and difficulty to get choice vehicles to various destinations after heavy downpour has been of major concerns with many rendered stranded and at mercies of touts and traffic robbers.

Reacting to the situation, the National Emergency Management Agency (NEMA) urged residents across the state to observe all safety precautions during downpours, adding that Lagosians should avoid driving when flood covers half of vehicles’ tyres.

NEMA’s Acting Assistant Zonal Coordinator, Southwest Zonal Office, Ibrahim Farinloye, said that drivers should park their cars once rainwater occupy half of the wheels. According to him, once the rainwater gets to half of the wheels it sweeps off your vehicle, kindly park and move on to higher ground for safety.

Farinloye also advised that trekking should be avoided during downpours. ”The rainwater must have risen above our ankles, once it happens like this, the flood has the capacity to carry us off,” he said in a statement made available to journalists on Friday.

He advised teachers to keep pupils in classrooms during downpours, no matter the duration, to safeguard their lives. The NEMA boss warned people living in buildings with signs of danger to report to the appropriate agencies for assistance.