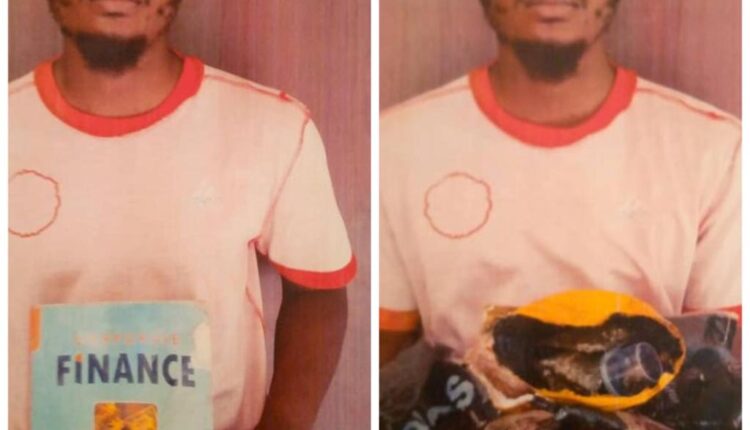 A 24-year-old 400-level student of the Federal University of Technology, Minna, Abel Idio has been arrested and detained by the National Drug Law Enforcement Agency (NDLEA) for selling illicit drugs within the vicinity of the school.

The 24-year-old was said to have specialized in concealing two strong variants of cannabis, Arizona and loud in textbooks, and selling it to the members of the school before he was nabbed by the law enforcement agency.

Confirming the development, Commander, NDLEA Niger Command, Haruna Kwetishe, said Abel was arrested in Gidan Kwano within the vicinity of the university by the anti-drug agency on Friday 30th April 2021.

“Abel uses the inner pages of his textbooks to conceal the drugs within the campus to sell.”

Through a statement by the NDLEA Director, Media, and Advocacy, Femi Babafemi, Kwetishe said that the command has also arrested two drug traffickers, identified as Yahaya Joshua and Yahaya Audu along Mokwa-Jebba road, the axis of the state. He said 32kilogrammes of cannabis Sativa were intercepted from the suspects on Thursday, 29th April 2021.

While commending officers and men of Niger Command for disrupting the activities of drug cartels in the state, the NDLEA Chief Executive Officer, Brig. General Buba Marwa (Retd), charged the Command to remain relentless in pursuit of the Agency’s mandate to rid Nigeria of illicit drugs.