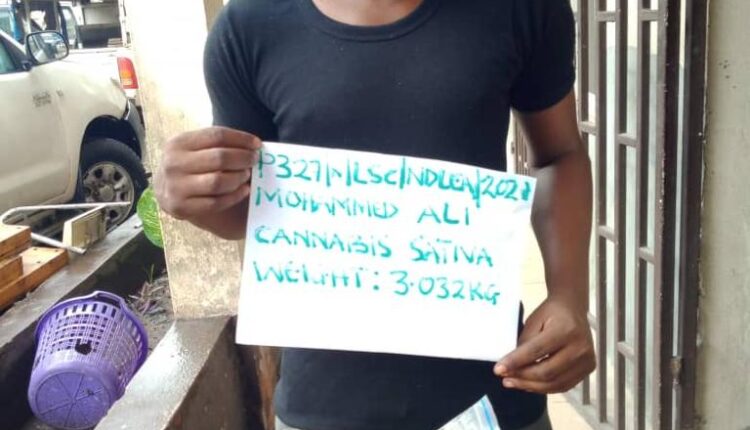 As stated, Mohammed, who hails from Nguru, Yobe State but brought up in Lagos, was on his way to the motor park, traveling back to ATBU, Bauchi via Kano before he was nabbed by the law enforcement agency.

Confirming the development, the NDLEA’s Director, Media & Advocacy, Femi Babafemi, said the suspect was arrested at a motor park in Iddo, Lagos, by the anti-drug agency on Thursday, June 10, 2021, following a tip-off.

According to him, the suspect claimed he met an acquaintance, Ahmed who upon learning that he was traveling back to school implored him to help deliver a travel bag containing the seized 3.032 kilogrammes of cannabis Sativa to one Ugo who lives in Sabon Gari, Kano.

“Ahmed told the suspect that he would send Ugo’s phone number to him through SMS to facilitate the delivery of the consignment when he arrives Kano.”

Babafemi in a statement disclosed on Sunday noted that during interrogation, the suspect who admitted knowing that the bag contained drugs however denied receiving or being promised any form of gratification for agreeing to take the drugs to Kano.

While commending officers and men of the Command the feats, the NDLEA Chief Executive Officer, Brig. General Buba Marwa (Retd), charged the Command to remain relentless in pursuit of the Agency’s mandate to rid Nigeria of illicit drugs.

He asked them to remain vigilant and intensify the ongoing offensive action against all drug cartels in their areas of responsibility.