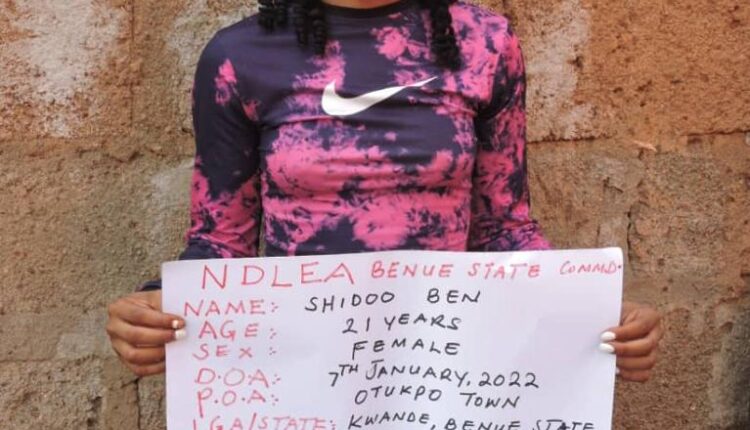 The National Drug Law And Enforcement Agency, NDLEA, has arrested a 23-year-old 500 level student, Simon Richard, who is in the Department of Agric Economics and Extension, Federal University of Technology, Minna and 13 others for drug trafficking across Niger, Ogun, Kwara, Plateau, Rivers, Ondo, Benue and Delta States.

As disclosed by the Agency’s Director, Media and Advocacy, Femi Babafemi, on Sunday, Richard was arrested at Gidan Kwano Talba road, Minna with different quantities of Loud and Tramadol in Niger State, while in Benue state, Ben was arrested with 14 pinches of crack cocaine at Jada Hotel, Otukpo.

She was said to have traveled from Abuja to sell the drug in Benue while a raid in Jigbele Lota camp, Owo axis of Ondo state led to the recovery of 598kg cannabis and the arrest of Chukwuemeka on Thursday 6th Jan.

In Ogun state, Samuel and Taye were arrested in Itaka and Odo Eran axis of Abeokuta North with different quantities of cannabis sativa, just as Adamu and Mohammed were intercepted with 81kg cannabis along Ilorin-Jebba expressway on Tuesday 4th Jan.

In Plateau state, Emmanuel, Timothy and Markus who were said to be siblings were arrested on Thursday 6th Jan. at Kwakwi village, Riyom LGA with different quantities of cannabis and a locally made pistol.

Also, At least, Daniel and Chukwube were arrested in Rivers state with quantities of Methamphetamine; Heroin; Cannabis Sativa and Cocaine as well as N364, 500 cash on Thursday 6th Jan.

In Delta state, the anti-graft personnel supported by soldiers raided a warehouse in Abbi town, Ndokwa West LGA, where two variants of cannabis; Loud and skunk weighing 56.5kg believed to be imported from a neighbouring country and arrested Echicheli and Uzokwe on Wednesday 5th Jan.

On his part, the Chairman of NDLEA, Mohamed Marwa commended the officers and men of Niger, Ogun, Kwara, Plateau, Rivers, Ondo, Benue and Delta Commands as well as those of the Directorate of Operation and General Investigations, DOGI, for their dedication and commitment towards ensuring that illicit drug trafficking is fought across the country.