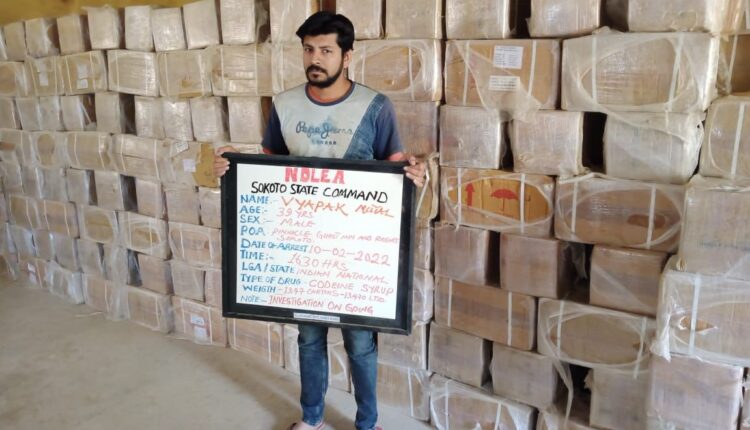 The National Drug Law Enforcement Agency (NDLEA) has intercepted 134,700 bottles of Codeine syrup imported into the country by an Indian businessman, Vyapak Nutal, in Sokoto State.

After intercepting the goods, the NDLEA has also arrested and detained Nutal and he could be arraigned as well as sentenced by the court for contravening the country’s law.

Nutal was apprehended by the anti-drug use agency after he brought the contraband product through the land border between the border in Sokoto State, Nigeria, and the Niger Republic.

As gathered, the suspect had loaded the consignment into trucks in Cotonou, Benin Republic, and drove through the land borders, accessing the country through Niger Republic before entering Sokoto state at the Illela border.

It was learnt that after sneaking into the country, he settled in a hotel and began to look for buyers for the controlled drug across the country.

The Director, Media, and Advocacy, Femi Babafemi, confirmed the arrest and disclosed that the Indian was apprehended through a credible intelligence report in the state.

Through a statement made available to newsmen on Sunday, Babafemi explained that “while operatives were on his trail, officers of the Department of State Security (DSS) were able to apprehend him and swiftly handed him over to NDLEA on Wednesday 10th February 2022”.