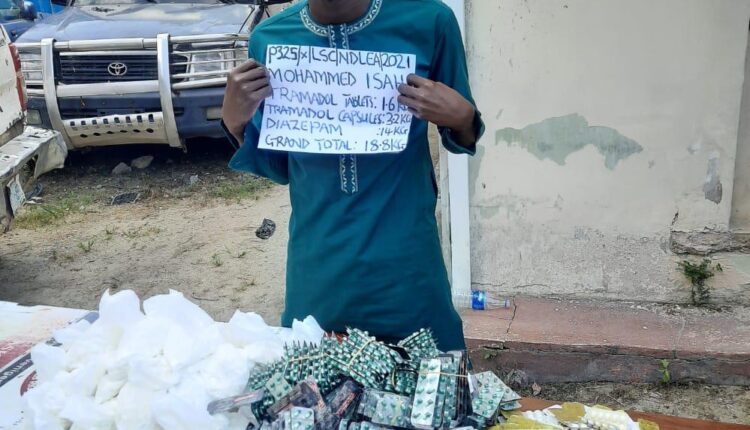 At least 34,950 Tramadol and Diazepam capsules said to have been procured by members of insurgency group, Boko Haram have been intercepted enroute Borno State by the Nigerian Drug Law Enforcement Agency (NDLEA) during a routine patrol and surveillance to prevent drug abuse across Lagos.

The substances were said to have been intercepted by NDLEA while about to be transported from Lagos to Borno by a 25-year-old man, Mohammed Isah, who was recruited by the insurgents to move the drugs to their camp.

Isah, who was allegedly arrested by the anti-drug agency at a motor park in Agege, was with 12, 390 capsules of Tramadol weighing 4.8kg and 22,560 tablets of Diazepam with total weight of 14 kilogram which brought total weight of the exhibits to 18.8kg.

The Director, Media and Advocacy for NDLEA, Femi Babafemi, through a statement made available to The Guild on Saturday, hinted that the suspect was under interrogation to ascertain the buyers across the country.

Babafemi added: “Isah hails from Mandara Mountain, Ashgashia, in Gwoza Local Government, Borno State and he is under interrogation. We need to understand that he came to Lagos in 2013 and started life with riding commercial motorcycle popularly called Okada and then ventured into commercial tricycle operations also known as Keke Marwa before moving into township bus business, moving commuters from Ikeja to Ojota.

“On Friday, 28th May, according to him, one Kakali Abubakar, who also hails from Mandara Mountain, invited him to see him at Ezekiel Street, Ikeja, where he gave him the assignment of transporting the drugs to Maiduguri for a fee of N50, 000, which he accepted. He said Kakali advised him to either board a Tanker or Trailer from Lagos to Maiduguri to avoid being caught. He agreed but rather travelled in a bus operated by SD Motors from Lagos to Kano and then take another vehicle to Maiduguri.

“The suspect claims he accepted the offer because of the monetary benefit due to pressure on his finances as his wife and three children displaced by Boko Haram activities are currently in a refugee camp in Maiduguri. Investigations revealed that before Mohammeds arrest, Kakali had travelled out of Lagos to Maiduguri to await the arrival of the consignment”.

In his reaction to the arrest, Chairman/Chief Executive of NDLEA, Brig. Gen. Mohamed Buba Marwa (Retd), commended the officers and men of the Lagos state Command of the Agency for their vigilance and blocking such volume of drugs from getting to Borno state, which is currently the hotbed of insurgents activities in the country. He asked them to remain proactive and committed to the Agencys common goal.