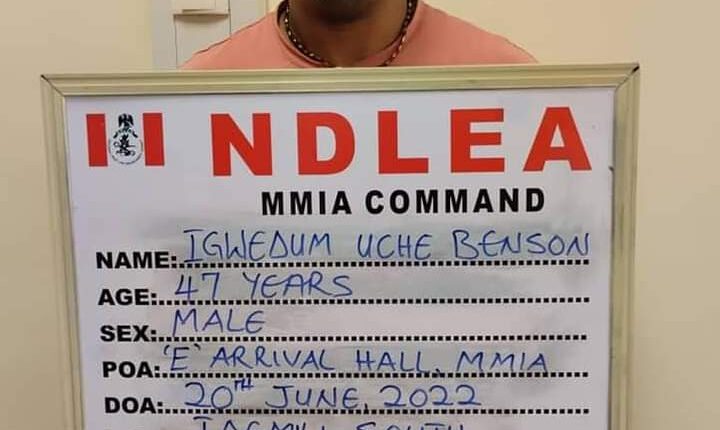 A Brazilian returnee, Igwedum Benson has been arrested by the National Drug Law Enforcement Agency, NDLEA, for concealing drugs into private parts at the Murtala Muhammed International Airport, Ikeja axis of Lagos.

Benson was said to have arrived the airport with 50 pellets of cocaine concealed in his private part and was apprehended on Monday upon his arrival on Ethiopian Airlines from Sao Paulo, Brazil via Addis Ababa.

During interrogations, the drug dealer was said to have confessed that he had swallowed 50 wraps of cocaine before departing Brazil and excreted 48 pellets in Addis Ababa where he handed them over to another person.

The suspect was said to have claimed he was unable to excrete the remaining two wraps at the hotel room in Addis Ababa before boarding his flight but later excreted them in the aircraft restroom during the flight from Ethiopia to Lagos.

As disclosed through a statement released by the agency’s Director of Media and Advocacy Femi Babafemi, on Sunday, in Abuja, a drug kingpin, Onyekachi Macdonald behind attempts to export 40 parcels of Methamphetamine to London, United Kingdom through the NAHCO export shed of the Lagos airport was arrested after three weeks of being on their wanted list.

Onyekachi was said to have been arrested at Manacola estate, Alakuko axis of Lagos three weeks after his consignment weighing 2.05kilograms was intercepted at the airport and his accomplice Peter Anikan was arrested.

Babafemi stated that during his interrogation, the suspect confessed that he had lived in Dubai, UAE for 10 years before returning to Nigeria in 2019 and that after his return, he opened a phone accessories shop in Sango Otta, Ogun state but the business collapsed.

On his part, the Chairman/Chief Executive of NDLEA, Mohamed Marwa commended the officers and men of the MMIA, Lagos state Commands of the Agency for the drug seizures and arrests especially of those who thought they could evade the long arm of the law.

He further encouraged them and their compatriots across other formations to intensify their efforts towards achieving set goals.