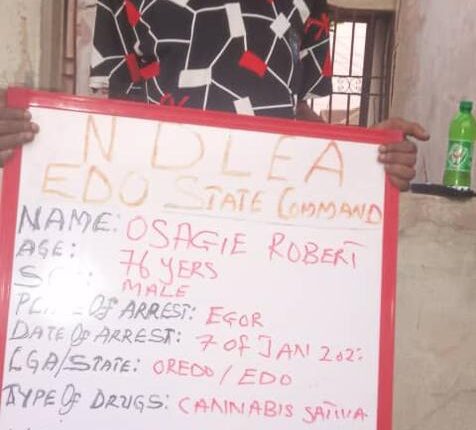 The National Drug Law Enforcement Agency, NDLEA in Edo state has arrested a 76-year-old drug dealer, Osagie Robert, and one other for importing illicit drugs.

The other suspect, who was arrested for impersonating to be a security agent, Godwin Ilevbare, popularly known as Edwin Agbon was said to have imported drug chocolates and cookies from Canada into Nigeria to sell.

As disclosed by the Agency’s Director, Media and Advocacy, Femi Babafemi, on Sunday, the septuagenarian popularly called old soldier was arrested on Friday 7th January, 2022 in Egor, Oredo area of the state for dealing in Cannabis.

Soon after Godwin signed for the consignment, undercover operatives embedded in the courier firm arrested him at his apartment in Benin city on Tuesday 4th Jan.

The consignment, which was said to have emanated from Canada, contains Colorado brand of Cannabis concealed inside chocolates and cookies weighing 6.491kilograms.

Meanwhile, Godwin was nabbed during a controlled delivery of a consignment shipped into Nigeria through a courier company while the drug cookies and chocolates found on him weighed 5.566kg and 0.383kg respectively.

On his part, the Chairman/Chief Executive of NDLEA, Mohamed Buba Marwa commended the officers and men of Edo commands as well as those of the Directorate of Operation and General Investigations, DOGI, for starting the new year with a strong message to drug cartels that the Agency will not relent in its determination and efforts against drug abuse and illicit drug trafficking in Nigeria.