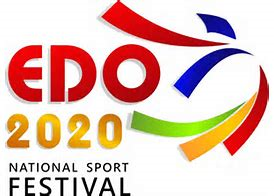 The Lagos State Government had revealed that it is set to receive the Edo 2020 Unity Torch, in preparation of the state’s outing in the upcoming National Sports Festival, for which cause the unity torch has been presented to governments throughout states of the federation.

It said that the biennial multi-sport event had been organised as a unifying tool by the federal government through the use of sports to bring athletes from all states together and foster feelings of unity, camaraderie and patriotism amonst Nigerians.

The state explained that the torch, which had made its rounds starting from when it was received by the President, Muhammdu Buhari, in Abuja, from which it had been taken to and received by various state governments in the country, was expected to be received in Lagos, thus symbolizing the spirit of oneness and unity among the 36 federal states.

Speaking through a tweet released on its official handle @LagosSportsComm, on Thursday, the State Sports Commission said that the State Governor, Babajide Sanwo-Olu, would be receiving the torch later in the day, at the Ikeja state house complex, and added that several state officials were expected to be present, including Commissioner of Youth and Social Development, Olusegun Dawodu, Sports Commission Chairman, Sola Aiyepeku and Sports Commission Director General, Toyin Bolowoton.

The commission stated that the ceremonial reciept of the torch was expected to also be attended by top officials from the Ministry of Youth and Sports as well as selected athletes and sports men from Team Lagos. 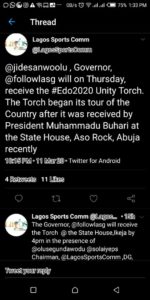 The Guild gathered that the upcoming National Sports Festival, which is sceduled to be hosted by the Edo state government, is slated to commence on March 22 to end on April 4th,2020, and that athletes, representing each of 36 states of the federation, are expected to compete in all available sports categories, adding that sports afficionados were also expected from within and outside the country to view and take part in the sporting festivities.

The host state Governor, Godwin Obaseki, however, has assured Nigerians that Edo state is ready to undertake its hosting duties to meet up with international standards, as his administration reconstructed the Samuel Ogbemudia Stadium and fitted it with state of the art facilities ahead of the March national games.

Coronavirus may be over by June -China